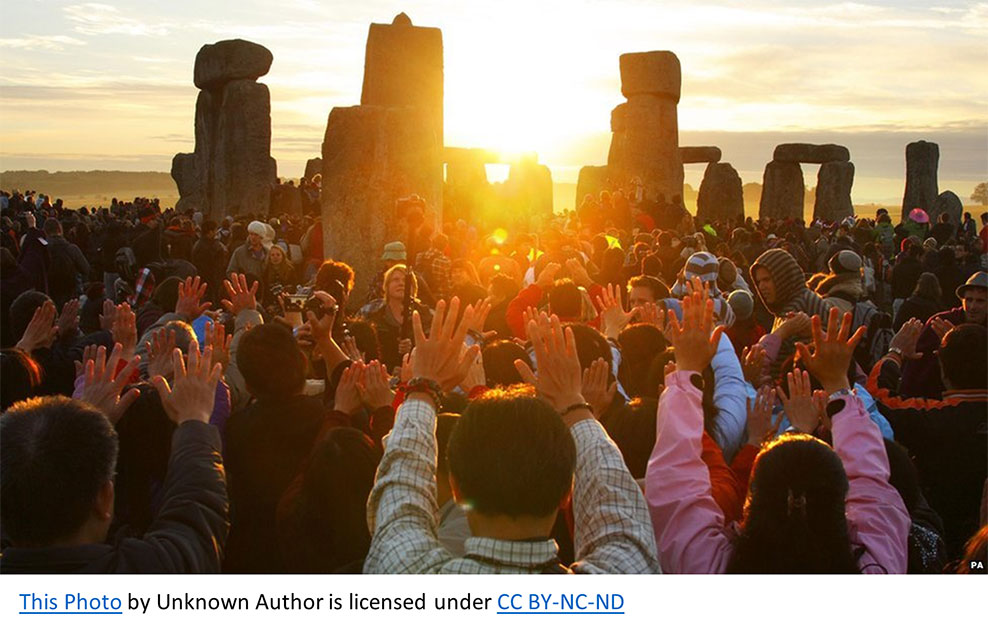 First up, Happy Solstice to all around the globe. Whether you are welcoming winter or summer, the solstice is always a chance for us to pause and reflect as the sphere we inhabit spins around the Sun and stands still for 3 days. A good time for stillness in us all, whether to reflect internally or engage externally.

Recently, mention has been made of the 10-year anniversary of the transit of Venus across the sun, on June 5, 2012. I must confess I’d forgotten all about it for the moment, as trillions of bits of data has entered our psychic sphere since then. But it is an event I would like to commemorate. These transits take place only every 125 years, in pairs. The next set will occur between 2117 and 2125. Our lifetime transit encompassed the period 2004-2012, both in June, in the middle decan of Gemini.

A Venus transit is like an eclipse; in Venus’ case the planet does not cover the entire face of the Sun as in a Solar eclipse. Rather it appears as a dark spot or a series of dark spots as it moves across the Sun. Still, it is considered an occultation and in such a framework, it brings with it a flood of concepts, ideas and information which has the overall effect of changing how we do things in a big way. 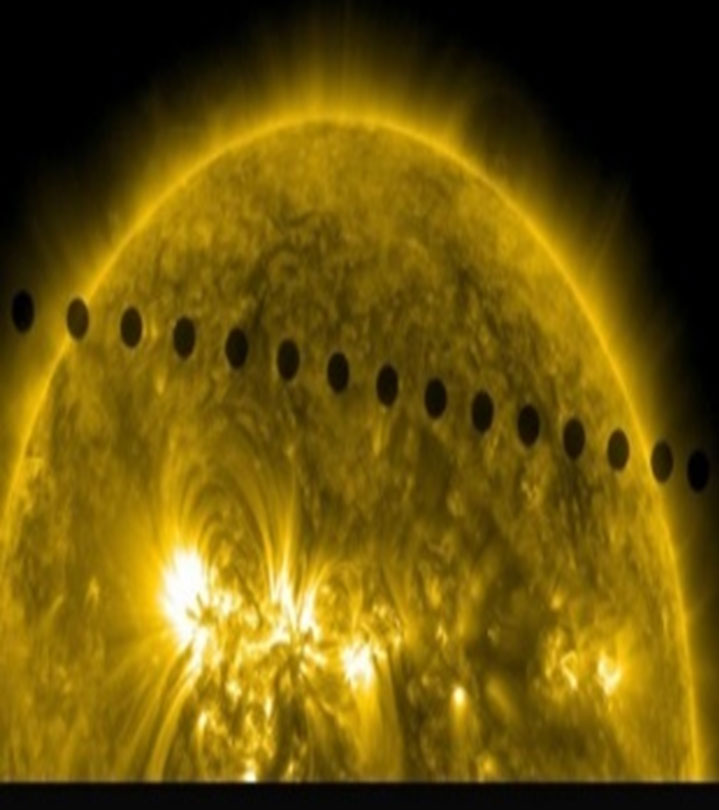 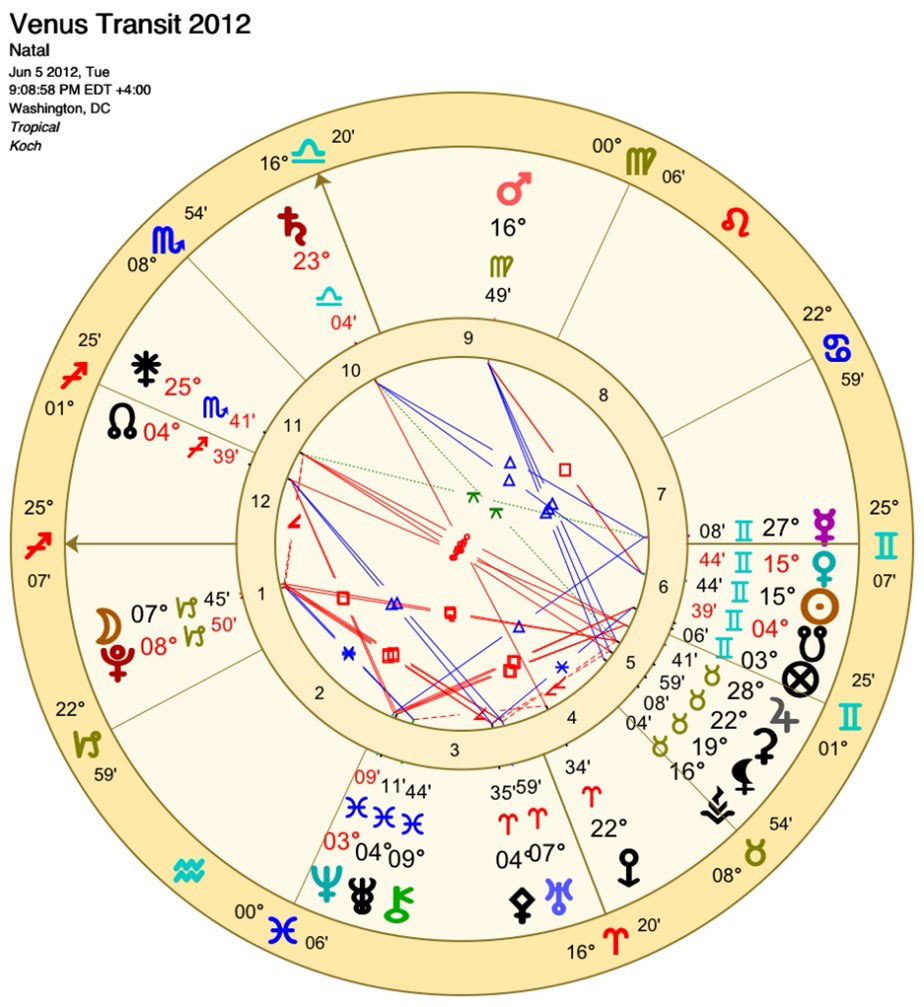 Between these two transits of ’04 to ’12, smart phones became an everyday item, delivered to the hands of small children and to the hands of people all over the world. It gave us access to information in a flash and has dramatically changed the way we learn and disseminate information overall. Gemini governs the hands, the exchange of information, and flashing bolts of agility and mobility. Mobile phones, once only existed for the purpose of calling someone. Now they are the encyclopedia, dictionary, navigational device, calendar, alarm clock, camera, compass, internet provider, and anything else you might need, all in one trim, slim little hand-held (Gemini) package.

With that came social media platforms. Between 2004 and 2012 the launch of Facebook, YouTube, Instagram and Twitter all occurred. There is no doubt that they have dominated the world stage in terms of news and information. News channels on TV (a now dated instrument) compete daily with this online instant news. In a flash, social media platforms find, report (and even create) the news. Thus, they too have changed the way in which we, the public, is fed information.

Twitter, is the most Gemini-ian in terms of its motif. A little bird tweeting tweets, in short phrases, no larger than 140 characters, and going viral in a blink. These are all images associated with Gemini (the bird, short quick soundbites of info with great agility and speed). “Tweeting” is not a word I would have expected every media news anchor to be repeating on a daily basis, a mere 20 years ago. When I first heard it, I laughed. “So and so just tweeted…” sounds like something a child would say.

It has been widely claimed, with those claims being supported, that platforms such as Facebook have engaged in practices which manipulate the user’s online habits and preferences to influence them to purchase products online, as well as influence their opinions about political candidates and election results.

With the pending purchase of Twitter by Elon Musk, it is probable that we will witness more issues about the results in U.S. politics. Musk claims he wants to make it a platform for true “free speech” a concept that was an important doctrine in the constitution and considered vital by the Founding Fathers. That would include blocking no-one from saying what they want—whether it be from a grounded, sensible and reliable source or a wildly speculative and ungrounded nut case.

When someone who is highly influential tweets something, people’s attention spans, which are short to begin with, believe it and re-tweet and re-tweet and re-tweet until, true or false, it has spread around the globe. People are now called “influencers”. Popularity is measured in how many followers one has (does this sound a bit cult-ish?) True, some of the information is vital to us and can actually speed up the process of saving us from impending disasters. But there is always the flip side. Some of it is just pure lies, leaving it to the masses to decide whether it is true or not.

Discernment, which is more of a Virgo characteristic, is not usually assigned to Gemini, who just has an enormous capacity to take in the information without any filters. Even if we reject the information as immediately false, the fact that something outrageous has been put forth, plants a seed in the collective mind and the subconscious mind, that might question if it really could be true, after all.

This leads me back to the offer to purchase Twitter by Elon Musk, and wonder how it will change if the deal is consummated.

A look at Elon Musk’s chart for the day he was born (no time available) shows him to be a Cancer Sun with Mercury in Cancer. The U.S. Chart also has a Cancer Sun with Mercury in Cancer. They are interacting with each other in a dynamic way. Musk’s Sun is directly on the USA Jupiter-Venus conjunction, while his Mercury is conjoined to the USA Sun. The pair also has a Mars-Venus conjunction in Gemini, to add a bit of attraction and sparkle.

It’s no wonder Musk has done so extraordinarily well in the U.S. with his ideas, businesses and inventions (Mercury related). Whether he’s producing batteries to charge electric vehicles, or manufacturing electric vehicles, or boring underneath the earth to provide pipelines, to transmit whatever or launching into space, he’s a visionary and able to manifest his visions while at the same time, becoming the world’s wealthiest individual. (Don’t forget Mercury is the god of merchants, as well!) 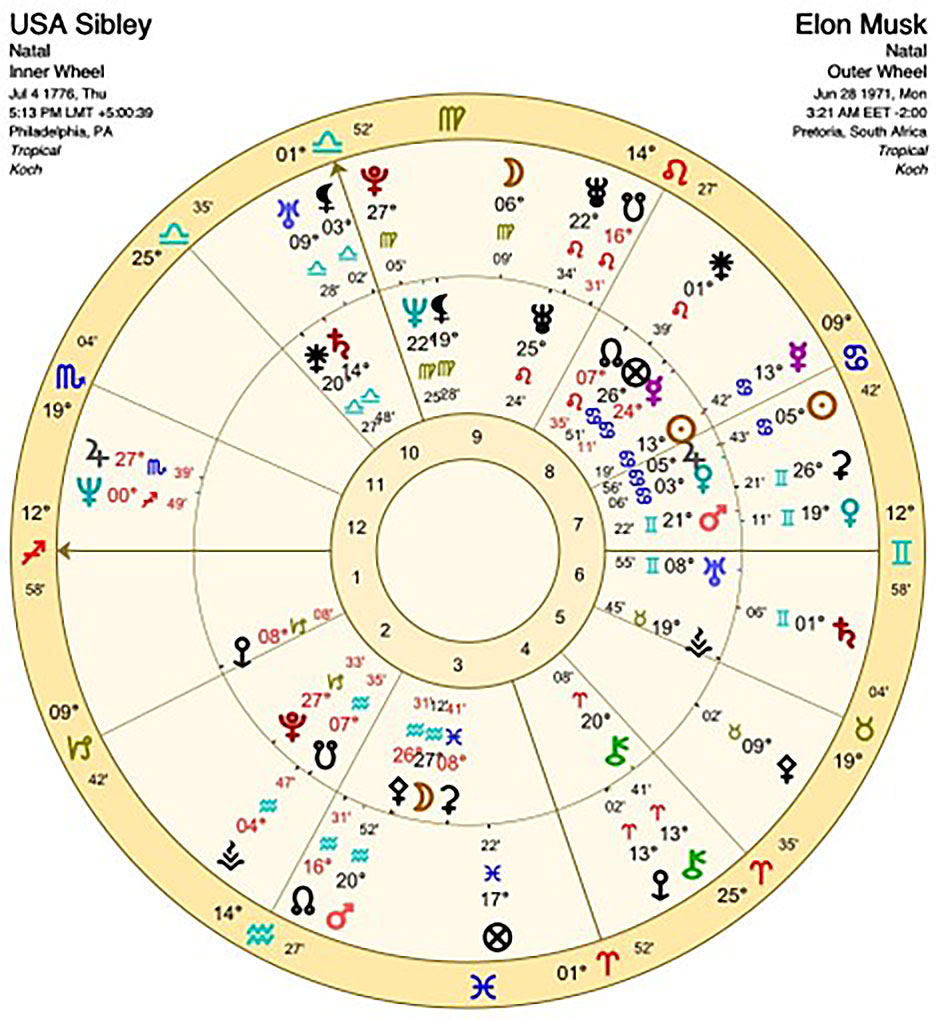 If we take a look at Elon’s Venus Star Points, we find a dynamic relationship to his own planets as well as those of the USA, Twitter, and the 2012 Venus Transit—Gemini emphasis in all!

Of particular note, here are the 5 Venus Star Points for Elon Musk. These Star Points are based on the 3 previous to his birth and the 2 following his birth, to create a Venus pentagram around his chart. These five little Venuses, especially the one at the head (just previous to birth) act as receptors of energy from daily planetary transits and from the planets and angles of people one encounters through life. Once fed into these receptors, this energy becomes interpreted by the Venus Star mechanism to produce life changing events.

House positions in the following chart of Musk are based on a noon time of day. No exact time of birth for him is available at this time. 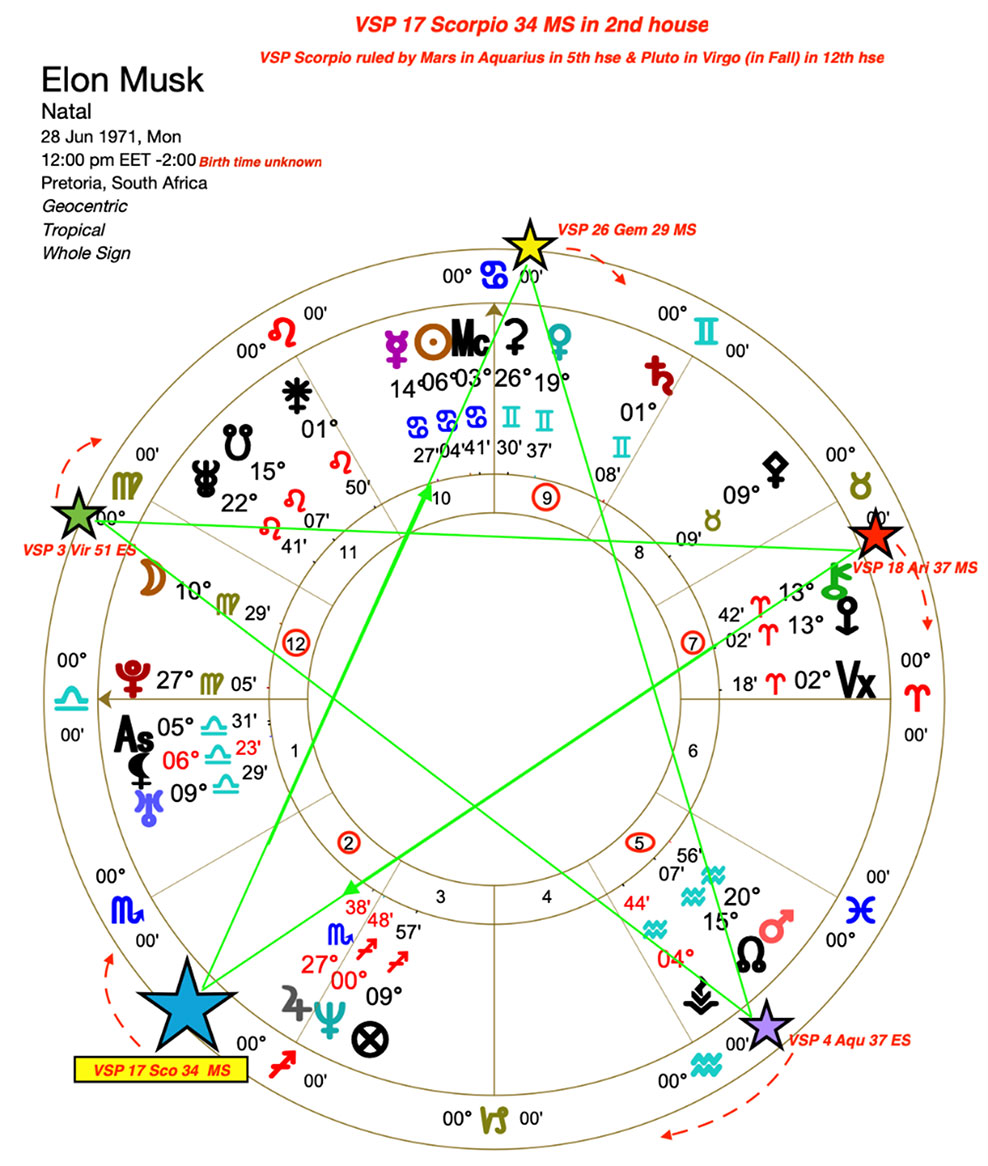 He was born during that very brief time in recent history where there were 2 air signs operating on the Venus Star (1964-1982). These two air signs produce a treasure chest of ideas (Gemini) followed by inventions (Aquarius). Notice his Gemini Leg conjoining his natal Ceres and Venus in Gemini (recalling that recent Venus Gemini transit) and air sign Aquarius, his arm, conjoined to Vesta in Aquarius. Air sign Gemini is the foundational foot, being fed by his VSP in Scorpio. The Gemini foot, in turn “feeds” Aquarius, which then becomes the helping hand for his Scorpio VSP. Scorpio, among other things, deals with large caches or accumulations of cash!

We shall see how these energy receptors work in his chart when the planet Uranus, now transiting through Taurus, makes a direct 180° alignment with his natal Scorpio VSP at 17°34’ Scorpio, scheduled for this summer, around June 27th. It will repeat twice more, completing in April 2023. Along with the lunar nodes transiting this VSP degree for Elon, his light is shining in dramatic and unpredictable ways at the moment.
At this writing, the Twitter purchase is on hold until after Musk’s team scrutinizes and analyzes some of the finer points of the deal.

The Twitter chart is also very much filled with planetary points of interest. Twitter’s chart (first tweet) is loaded with both air signs Gemini and Aquarius, which also proliferate in both the U.S. chart and Elon’s chart. Of particular interest is Mars in Gemini on the ASC of Twitter, so appropriate for the description mentioned above about tweeting and re-tweeting, and spreading reliable news and information or completely false gossip around the globe, going viral, in a couple of seconds. And, in true Mars in Gemini fashion, letting everyone spout off!

Twitter’s Mars is 180° from the Moon, which elicits extreme reactions and emotional feelings. That same Mars is trine both Venus and Neptune in Aquarius, which suggests how wildly popular and somewhat addictive the platform has become. Furthermore, Mercury conjoined to Uranus in Pisces seconds that notion. 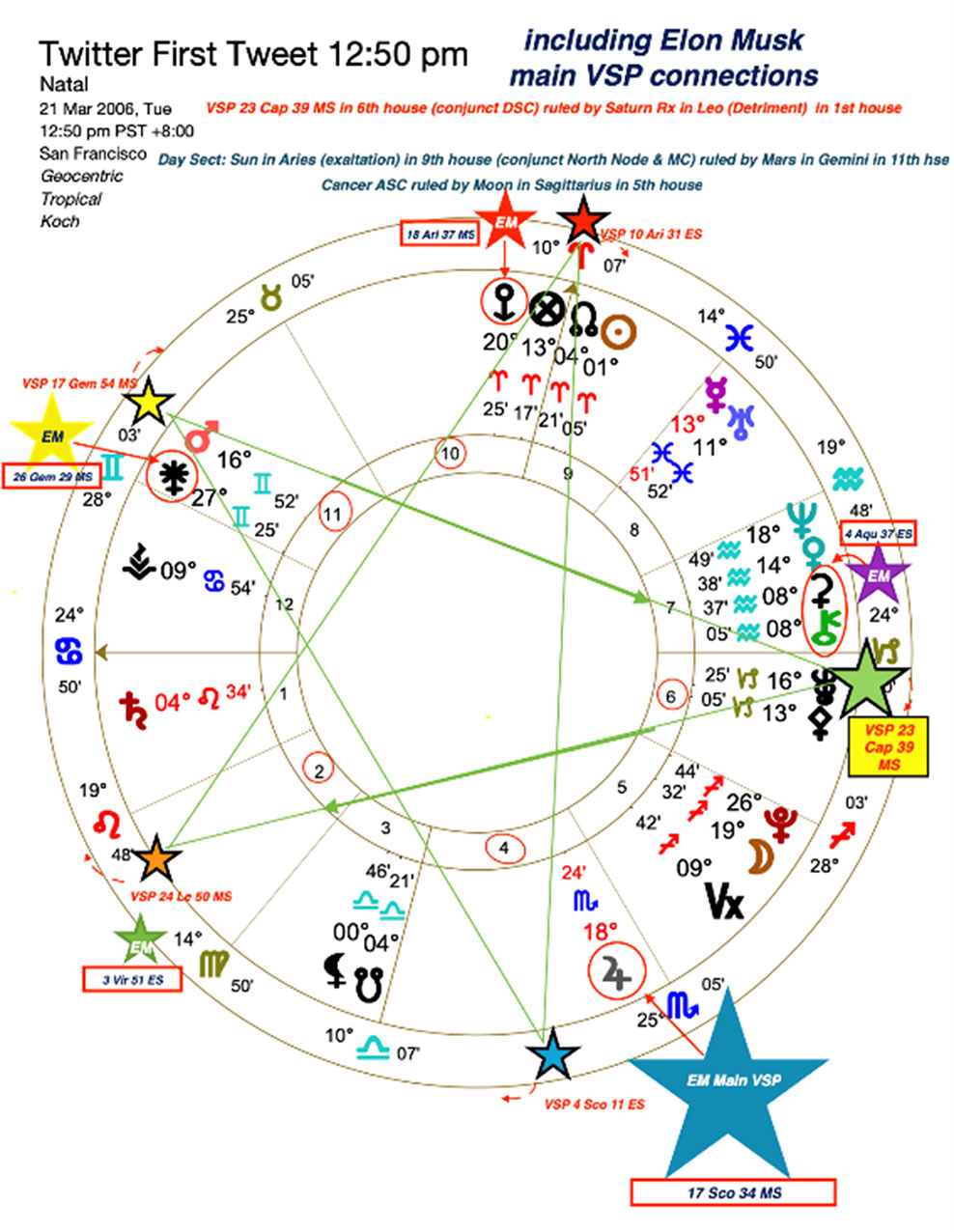 Finally, we have Musk’s bid to purchase Twitter for $44 billion, on April 25, 2022. Of note is the triple line-up of Venus, Jupiter and Neptune in Pisces, a signature of dreaming big and manifesting it. It is also a signature of “buyer beware”, which at the moment, Musk is taking heed of by checking the merchandise carefully. All three of these Pisces planets are closely aligned to a 180°degree aspect from the USA Neptune in Virgo. Pluto in this chart is conjoining the USA Pluto. Enormous impact on the US? I think it goes without saying. Stay tuned for the next chapter in this sensational saga. 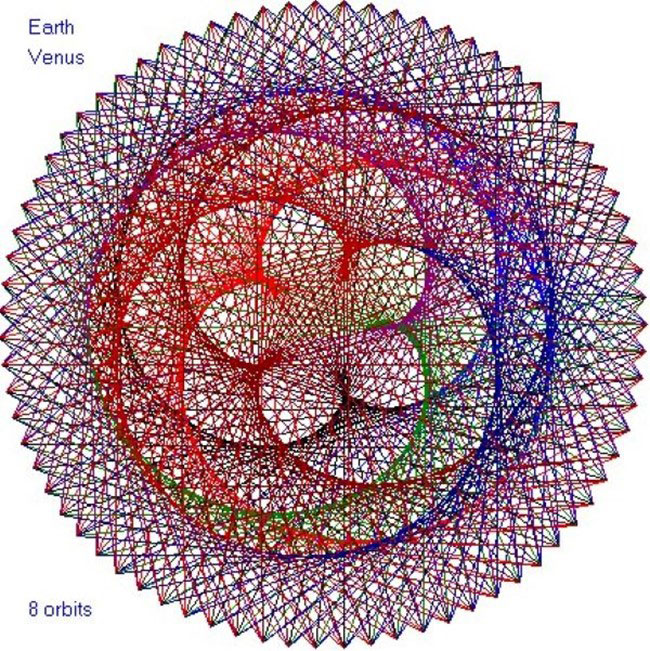 Please join us on September 16-18, 2022 in Rhinebeck, NY at a fabulous workshop/retreat center, Omega Institute for a unique weekend program featuring five fabulous astrologers. Unlike other astrological conferences, all five faculty members will be doing their presentations sequentially. You don’t have to choose between tracks or topics. Everyone will be in the same room, partaking of the entire conference.

This is typically a beautiful time of year to visit upstate New York. The weather is lovely and we will be in a natural setting.
The Venus Star Point will be featured as an in-person opportunity with founder and creator of the system, Arielle Guttman. View this video to get a peek at what’s in store for you by registering for this event. View the video here: