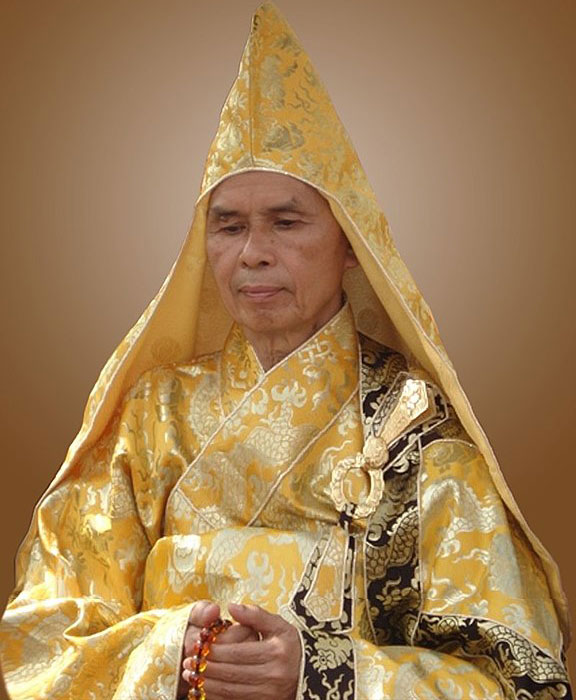 “The practice of peace and reconciliation is one of the most vital and artistic of human actions.”
Thich Nhat Hanh

Thich Nhat Hanh (affectionally known as Thầy to his followers), Zen Master, global spiritual leader, poet, artist, and peace activist was born on 11 October 1926 in Bach-Ma, Vietnam under an Aquarius Venus Star Point (VSP) Morning Star, ruled by Saturn in Scorpio and Uranus in Pisces. This placement endows creative, visionary genius (Uranus) and his teachings impacted politicians, business leaders, activists, teachers, and many others throughout the world (Saturn).

Thầy entered the Từ Hiếu Temple in Huế, Vietnam at the age of sixteen beginning a spiritual journey that would touch the hearts and minds thousands of people throughout the world.

On the Venus Star Point, the Aquarius VSP is “fed” by the Cancer VSP, and it is significant that Thầy spent 39 years in exile from his home country Vietnam for having the courage to speak out against the war in Vietnam in the 1960’s. The love of his homeland and people in many ways nurtured and sustained his activism for peace and reconciliation throughout the world.

Thầy’s Aquarius VSP, in his 2nd house of personal resources and talents is in a close conjunction to both Jupiter and his Part of Fortune indicating great spiritual and philosophical gifts and capacity for “knowing” the essence of true happiness. It is also in a close trine to his Sun in Libra in the domain of career and reputation and square Mars in Taurus in his 5th house of creativity, joy, and pleasure.

Every point of his “Starman” is in aspect to either a planet, point or asteroid in his natal chart, including: Saturn, (Scorpio VSP Evening Star influencing his connections with groups and collaborative networks); Vesta and Hygeia (Virgo VSP Morning Star highlighting his beliefs, foreign journeys and publishing); Pluto and the Nodes (Cancer VSP Evening Star emphasising his partnerships ) and Chiron (Taurus VSP Evening Star accentuating themes of wounding and healing in area of home and family).The balance of elements and modalities on his Starman is dominated by fixed water (Scorpio) and fixed earth (Taurus) giving extra strength and stamina and groundedness to his humanitarian and spiritual activism. His Starman is more weighted with Evening Stars and has a more Yin nature, which was visibly demonstrated by his gentle demeanour, “kissing the earth with his feet”. 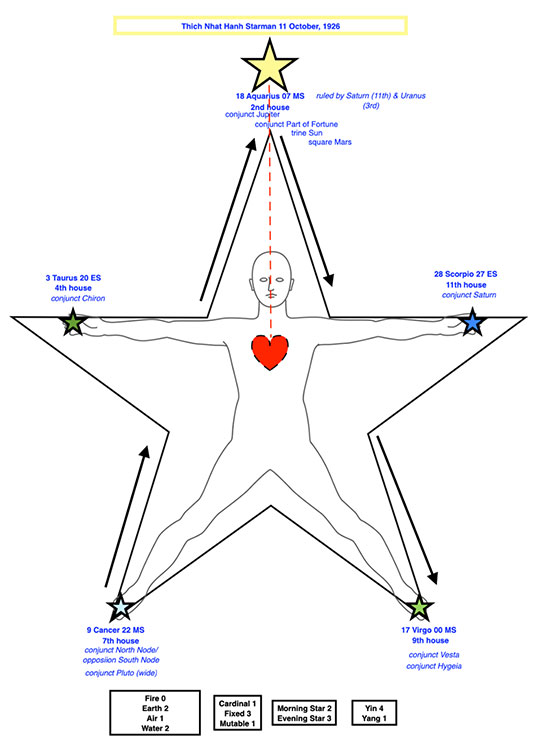 On 22 January 2022 at the age of 95 years, after a lifetime dedicated to world peace, nonviolent activism, mindfulness, and love, Thầy passed away at the Từ Hiếu Temple in Huế, Vietnam where his vocation as a monk began nearly 80 years ago. At the time of his passing the transiting Capricorn VSP Morning Star was square his natal Sun and Ceres, trine his natal Mars, and semi-sextile his natal Jupiter, Part of Fortune, and natal Aquarius VSP. The transiting Aries VSP Evening Star was in opposition to his natal Pallas Athene, Venus and Midheaven. Martin Luther King Jr. once described Thầy as “an Apostle of peace and nonviolence” and he is certainly acknowledged as having been one of the great spiritual leaders of our times. His legacy lives on in the hearts and minds of those in the many spiritual communities he founded throughout the world.