The Venus Star Points and Planets of Russia

The Venus Star Points and Planets of Russia 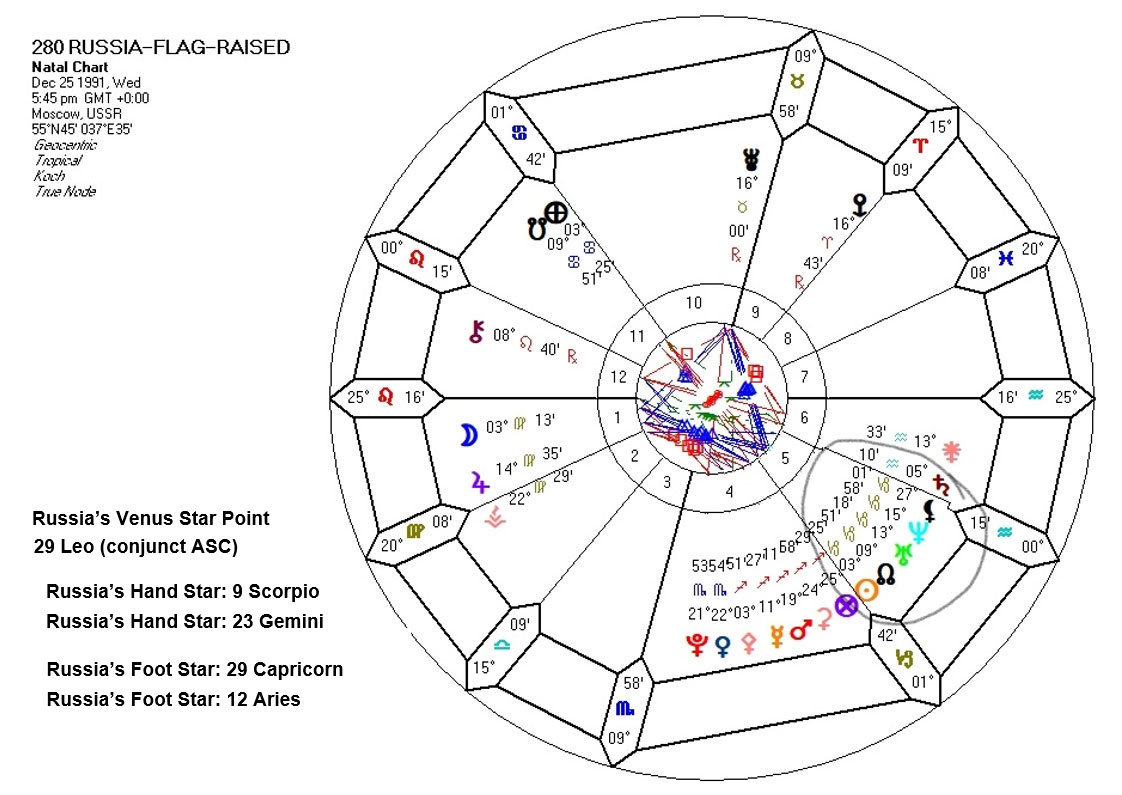 This chart of Russia is the preferred chart used by astrologers, based on the raising of the flag of the new Russia on December 25, 1991. It seems to be a valid chart, especially in regard to what is occurring now. If you’ve read the above analysis about the current VSP in Capricorn, this new Venus cycle occurring in Capricorn (18°), the recent Venus Retrograde through Capricorn and Mars and Pluto occupying the sign simultaneous to Venus—you can understand the action initiated toward war.

Additionally, one of Russia’s 5 natal Star Points is its foot at 29° Capricorn, where Pluto will be hovering for the next 2 years and where Mars and Venus are presently sitting.

Russia’s natal Star Point is 29° Leo—the degree of astrology associated with royalty. But so is Ukraine’s chart, as it came into being the same year (1991). Both nations would see themselves as needing to be sovereign as well as influence their own destiny. Both nations are a Morning Star Venus, indicating Venus was rising before the Sun and their pre-natal cazimi was a retrograde Venus that transited the area from early Virgo to late Leo.

As of this writing, Jupiter is transiting in exact opposition to Russia’s natal Jupiter. Clearly, it’s efforts towards expansionism is not being well received by the rest of the world. Jupiter is also transiting in square to it’s natal Mercury-Mars conjunction, another suggestion that over-reaching can cause severe consequences.

Consequences is a term that is more related to Saturn – and its sign of Capricorn – the sign where Russia’s Sun and stellium occur. Note that Russia has just completed its first Saturn return (a 29-year cycle). After the Saturn return in an individual, they begin to show more maturity and develop a serious plan for their lives. Now that Russia has had its first Saturn return, does it feel more empowered and in a position to exert more clout? It seems that way.

But let’s review this situation in a few months, when Saturn parks itself on 25° Aquarius, opposite Russia’s natal ASC. This station will occur during May and June, 2022 with the exact station exact on 4th (Saturn turning Retrograde). Will it, exhibiting the maximum amount of hubris, defy the gods by attempting to seize even more power? Or, will it have reached a certain set of Saturnian limits?

Between now and then, we can only send positive energy out for a quick and workable resolution for all involved. And pray for lasting peace.