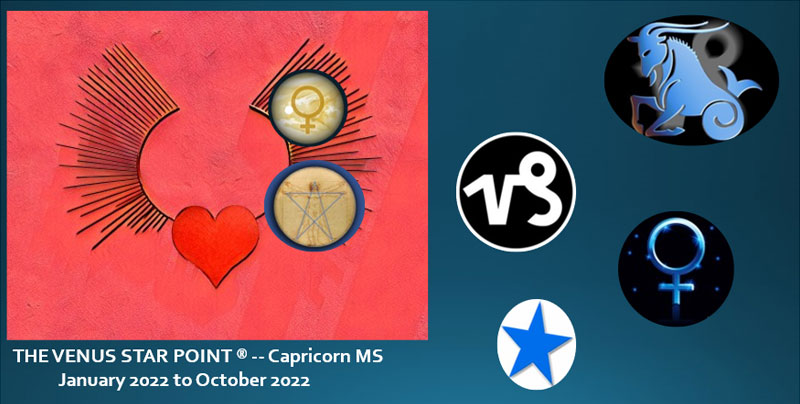 Since March 2021 the VSP has been hosted by the sign of Aries as an Evening Star. Summer nights in the northern hemisphere have been graced by the presence of Venus as the bright shining planet/star visible just after sunset, lighting up the sky for many hours. Soon we will say goodbye to Venus in the nighttime as she is heading for her rendezvous with the Sun where she will make a conjunction/cazimi/Star Point by early January. Between now and then, she will slip further down the horizon and begin to disappear. Then, about 10 days following her cazimi, she will emerge once again to be observed in the pre-dawn sky of the morning….in Capricorn.

Both of these signs—Aries, where she is coming from and Capricorn, where she is headed—are cardinal signs. Cardinal signs are productive. They initiate action and want movement. But there is a slight difference between the movement we witnessed in Aries and what may be forthcoming in Capricorn. Aries is fire, Capricorn is earth.

In Aries, the guardian planet of whom is Mars, action is generally taken for a personal nature. Mars was moving in direct motion during the entire Aries VSP, passing through one half of the zodiac, from Gemini to Sagittarius. This has resulted in a sense of accomplishment, progress being made, movement happening by unimpeded Mars. Independent action, personal freedom, an uninhibited sense of risk-taking and courage to embark on plans and projects with a can-do attitude—these are all attributes of Mars. Side effects can include irritability, clashing of wills, temper tantrums and minor accidents or injuries. For instance, airlines have reported an unprecedented number of cases where hand-to-hand combat took place at 30,000 feet between flight attendants and passengers on a regular basis!

In contrast, during the coming Star Point In Capricorn, where the VSP will answer to guardian planet Saturn, who will remain in one sign—Aquarius—during the entire 9.5 month VSP. With this scenario, a sense of accomplishment and completion may take longer. Aquarius is Saturn’s sign, and likewise, Saturn will be implementing some new laws designed to potentially control, restrict, contain and impose limitations upon massive population groups across the globe. We are witness to this happening already with the continued effects of the pandemic and all the new viral strains that are emerging. But as Aquarius is the sign most associated with the collective of humanity, there are bound to be some surprising responses and push back to what type of regulations are being implemented. Whether the response takes the form of massive protests or workers’ strikes or attempted coups, there will be push back. Another potential issue might be lack of resources, supplies, and basic needs affecting large population groups.

The VSP at 18 Capricorn

The 18-19 degree range of any sign in your own horoscope will experience an enormous amount of planetary energy in 2022. First, there is the VSP at the 19th degree of Capricorn (18°47’). Then there is the changing direction of Saturn, Capricorn’s guardian planet, at 18 Aquarius later on in the year (October). Furthermore, Uranus, the co-guardian of Aquarius, will sit on the 18-19 degree range of Taurus (July-October). And finally, there are the lunar nodes, who will pass through 18-19 Taurus in late July and a good part of August.

Capricorn gives us the energy of the mountain goat (or sea goat). It is a resilient animal, sure-footed and able to traverse steep and barren terrain. Capricorn is a cardinal earth sign that propels us to get to the top—of the mountain or to the finish line or to the satisfactory conclusion of a project we have begun and are seeking to bring it into full implementation. The urge will be present for us all to achieve something in this way. A look into what house Capricorn occupies in your chart will give a good clue as to where this will occur all year and how Venus and her Star will support you in that endeavor. We need to keep our eye on the goal, but at the same time, if we set our sights too high or unreasonable, we may experience disappointment, delay or complete collapse of that which we are attempting. Caution, patience, faith and not losing sight of the goal is required. Sometimes we experience the path as being too unattainable, too hard, too big a climb. But if we have faith in our abilities and we keep the dream alive, we are sure to make some sort of progress.

Resources for studying more about the Venus Star Point are available at:

How to find your Venus Star Point: Click Here

Join Arielle live for some of the upcoming programs featuring Q&A about the Venus cycle, the Venus retrograde, and this VSP cycle in Capricorn.

Arielle will be live and in person at Omega Institute in Rhinebeck, NY from September 16-18, 2022. She will join an outstanding faculty of astrologers in a weekend workshop on Heart-Centered Astrology. Details will be posted at Omega’s website in early 2022.