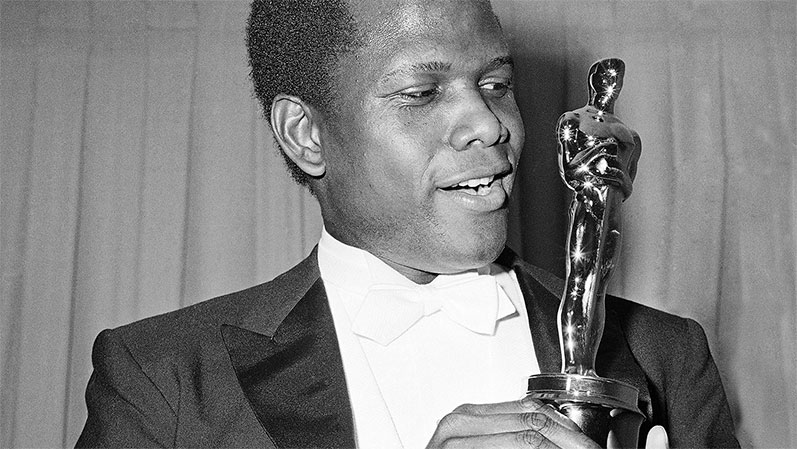 Natal VSP, key moments of his life and recent death

“With unflinching grandeur and poise – his singular warmth, depth, and stature on-screen
Sidney helped open the hearts of millions and changed the way America saw itself.”
President Joe Biden

Sidney Poitier, Bahamian-American actor, film director, activist, and diplomat was born on 20 February 1927 in Miami, Florida, USA under a Scorpio Venus Star Point (VSP) Evening Star, ruled by Mars in Taurus and Pluto in Cancer. The intensity of this placement and its association with extreme encounters with life and death, made its presence known right from the start, born three months prematurely, he was not expected to live. The youngest of seven children, he grew up on Cat Island in the Bahamas, his father a farmer and his mother, a soft and sensitive woman who greatly influenced his life. On the Venus Star Point, the Scorpio VSP “feeds” the Cancer VSP and the strong emotional bonds with his mother are clearly shown here. 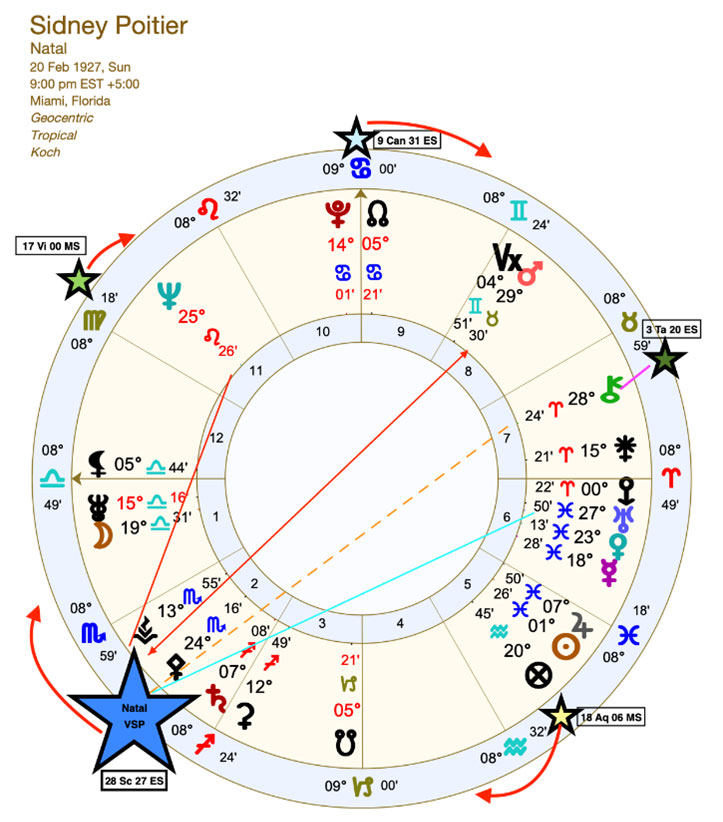 Poitier’s Scorpio VSP greatly influenced his personal resources, including his talents and sense of self-confidence, being placed in the 2nd house of his natal chart. It is in a close conjunction to his Pallas Athene, signifying his creative intelligence and his gifts in the creative arts and diplomacy. It also aspects several other natal planets including a trine to Uranus in Pisces in the area of health, work and service; quincunx Chiron in Aries in the area of partnerships; opposition Mars in Taurus in the realm of other people’s resources, intimacy, death and transformation and square Neptune in Leo in the domain of groups, friends and collaborative networks.

Every point of his “Starman” is in aspect to either a planet, point or asteroid in his natal chart, including: his Part of Fortune (Aquarius VSP Morning Star influencing his creativity, joy and pleasure); Neptune (Virgo VSP Morning Star highlighting both associations with collaborative networks and spirituality, seclusion and hidden enemies); the Midheaven and the Nodes (Cancer VSP Evening Star emphasizing career and reputation ) and Chiron (Taurus VSP Evening Star accentuating themes of wounding and healing in partnerships).

The balance of elements and modalities on his Starman is dominated by fixed water (Scorpio) underscoring the powerful intensity of the Scorpio VSP. His Starman is more weighted with Evening Stars and has a more Yin nature, which all helps to slightly ameliorate the main Scorpio VSP being driven by confrontational Mars and transformative Pluto.

The transformational capacities of the Scorpio VSP were demonstrated through Poitier’s determination to succeed as an actor. In his early twenties, barely able to read and write, after a couple of failed auditions, with the help of a work colleague, he taught himself these skills as well as elocution and stagecraft until eventually he landed a role in the film No Way Out which was released on 16 August 1950. At this time, the main transiting Aquarius VSP Morning Star was shining in his 5th house of creativity, joy and pleasure and his natal Scorpio VSP was in an exact trine to the transiting North Node in Pisces through his 6th house of health, work and service and the transiting Cancer VSP Morning Star was trining his natal Sun (conjunct Jupiter) in Pisces.

By 6 April 1959 Pointier was the first Black American actor to be nominated as Best Actor for the Academy Awards. While he did not win on this occasion, the nomination was both an important personal achievement as well as an outstanding achievement for the rights and status of Black American people in the USA. The transiting Scorpio VSP Evening Star, made an exact trine to his natal Mercury in the 6th house of health, work and service and a semi-sextile to his natal Moon in Libra in his 1st house of self and image. The transiting Aries VSP Evening Star also squared his Pallas Athene in the domain of personal resources and talents. 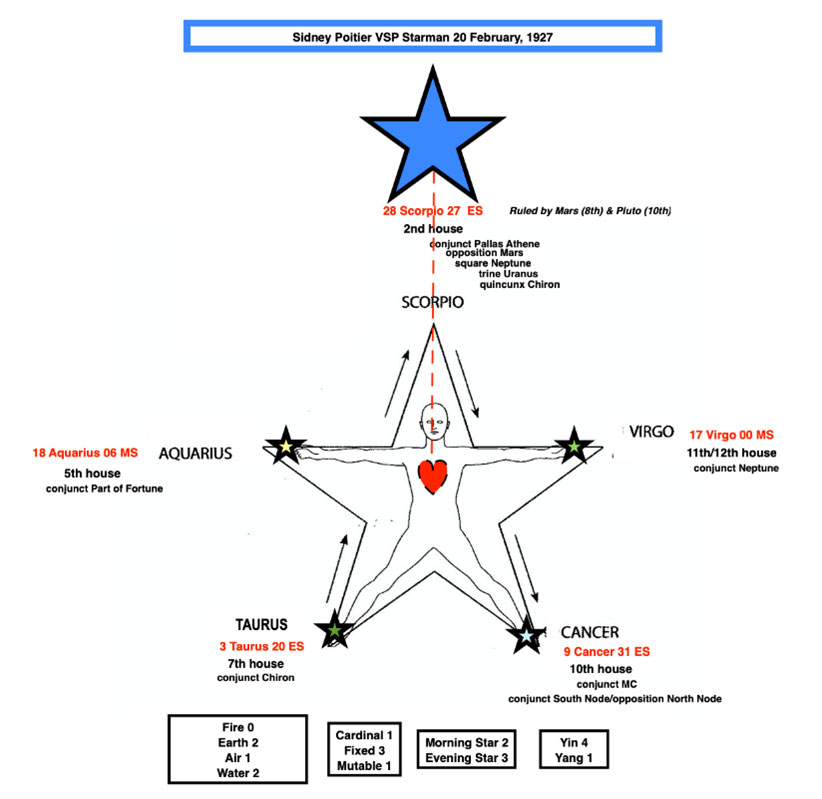 Five years later, on 13 April 1964, Poitier won the Academy Award for the Best Actor, again an incredible personal achievement and a victory for the Black American people, being the first Black American to win this prestigious award. The main transiting Virgo VSP Evening Star was in an exact trine to his natal South Node in Capricorn in the area of communications and sextile his natal North Node in Cancer closely conjunct his Midheaven. The Gemini VSP Morning Star (the inception point into this sign), squared his natal Uranus in Pisces in the area of health, work and service and sextiled his natal Chiron in Aries in the arena of partnerships. Furthermore, the Aquarius VSP Evening Star made a sextile to his natal Saturn in Sagittarius in his 2nd house of personal resources and talents and a semi-sextile to his Jupiter/Sun conjunction in Pisces in his 5th house of creativity, joy, and pleasure.

On 6 January, 2022, at the age of 94 years, after a long and illustrious career in the arts and diplomacy, Poitier died at his home in Los Angeles. The main transiting Aries VSP Evening Star was in exact opposition to his natal Black Moon Lilith in Libra in his 12th house of seclusion, spirituality, and hidden enemies, as well as in an exact square to his natal Nodes. His passing brought forth expressions of deep sadness and grief and many tributes of praise for a remarkable man who helped to effect great social change through his gifts and talents. The Former President of the United States of America said that Poitier had “[advanced] the nation’s dialogue on race and respect” and “opened the doors for a generation of actors.”