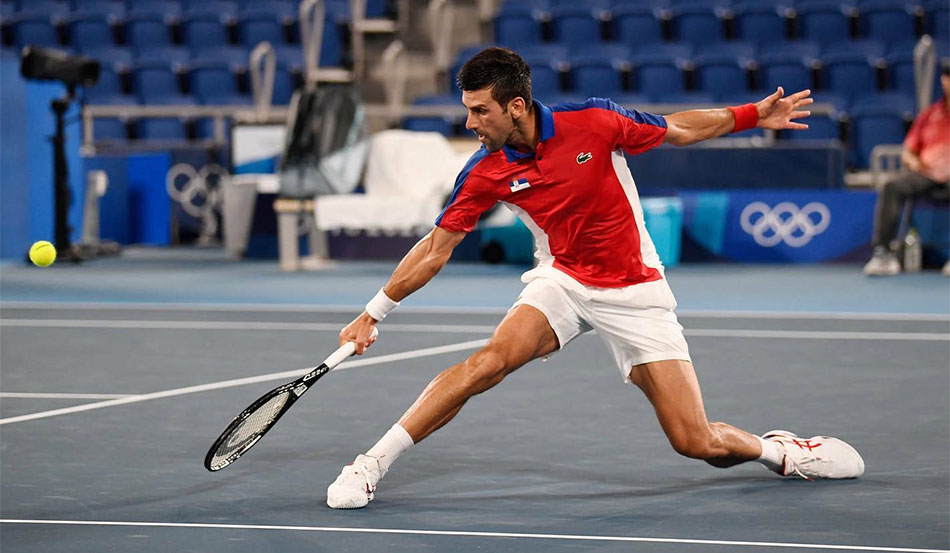 “Just believe in your dreams. If you have dreams, don’t give up.
Belief is the most common word to me, even more than hope.
For one, to achieve his dreams, he needs to truly believe in them.”
~ Novak Djokovic (from his website www.novakdjokovic.com) 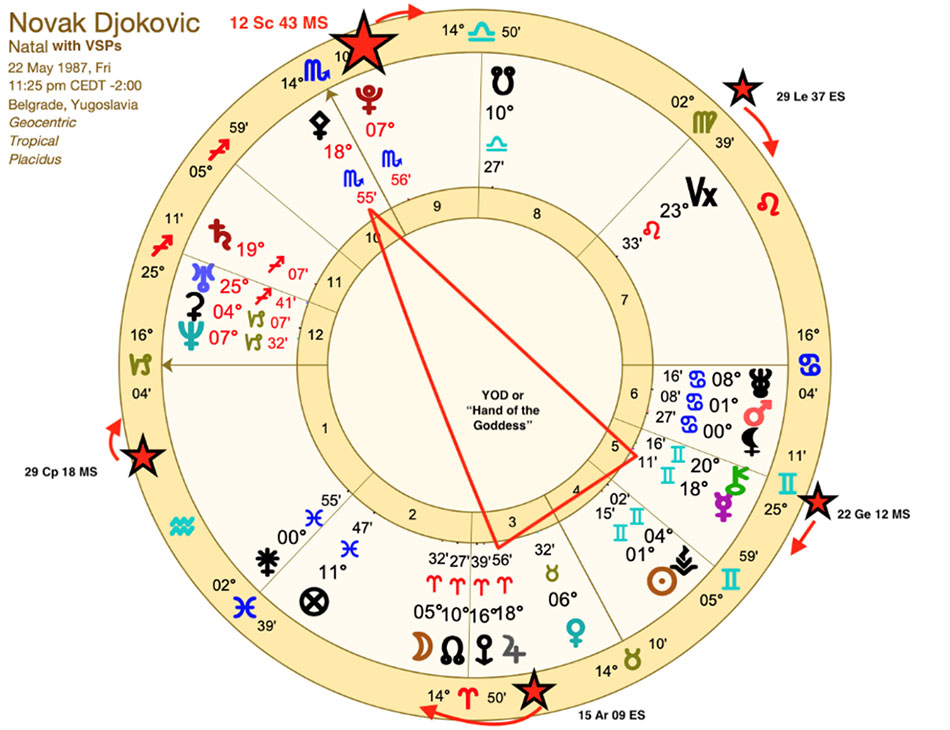 Novak Djokovic, athlete, entrepreneur, philanthropist, and holist has been “crowned” many times as number one male world tennis champion and in an ironic twist, his latest notoriety in being deported from Australia by the Australian Government in January this year has been in association with the coronavirus which literally means a virus resembling or likened to a “crown”.

Djokovic was born on 22 May 1987 in Belgrade Serbia, under a Scorpio Venus Star Point (VSP) Morning Star co-ruled by Pluto and Mars in his ninth house highlighting his beliefs, higher learning, and foreign travel, closely conjunct his Midheaven, Pallas Athene and Pluto. A truly formidable line-up of powerful celestial energies. The Morning Star confers the qualities of the Warrior Goddess’s active, primal, raw sensuality and the Scorpio VSP’s gifts and talents include a deep desire to delve into the mysteries of life and death through serious engagements with power, wealth, and sexuality and to transform one’s life and the lives of others, often enduring great tests and hardships yet arising from defeat and devastation with renewed vitality and strength. Djokovic’s Scorpio VSP “Crowns” his life, shining forth from the Midheaven, making significant aspects to almost every planet, point and angle in his chart, bestowing Venus’s bounty of a truly stellar magnitude.

The dominant aspect pattern in Djokovic’s chart is a Yod, with Pallas Athene at the apex in Scorpio in the tenth house emphasising his career and reptation in the world, and at the base, Jupiter in Aries in the third house of communications and Mercury in Gemini in the fifth house of creativity. The Yod, also known as “the finger of God” or the “hand of the Goddess”, is integral to the formation of the Venus Star Points. The signature of Venus is further inscribed on Djokovic’s chart with natal Venus conjunct the Nadir in Taurus, its sign of rulership, and with Neptune in Pisces, the sign of her exaltation.

On 9 January 2022, three days after his arrival in Australia to prepare to claim his 10th Australian Open Tennis Championship title, the transiting VSP at 18 Capricorn 42 lit up Djokovic’s first house, accentuating independently taken action, and triggering his natal Yod making an exact quincunx to Mercury (highlighting the area of creativity), an exact sextile to Pallas Athene (emphasising his career and reputation), an exact square to Jupiter (spotlighting the area of communications) as well as forming a close semi-sextile to Saturn in his eleventh house of social connections, hopes and dreams and finally, a close square to Eris in his third house and a close conjunction to his Ascendant. At the same time the transiting VSP at 18 Capricorn 42 made a close opposition to Australia’s Natal VSP of 15 Cancer 47, sitting in its ninth house presiding over legal systems and the body of the law. This powerful set of players and aspects on both sides set the stage and signature for the events that were to follow.

In the late afternoon of 16 January, the Australian Government deported Djokovic after nearly a fortnight of high drama including cancelling Djokovic’s visa and holding him in immigration detention on the basis, he was not vaccinated against Covid. Djokovic was subsequently released from detention by a Magistrate of the Australian Federal Court after which the Australian Government again cancelled his visa, to which Djokovic made a second legal appeal heard this time by a full bench of the Australian Federal Court which finally dismissed his appeal and ordered his deportation that evening, less than a day before the scheduled start of his Australian Open title defense. At the time of this final Court decision, transiting Venus retrograde had moved out of its cazimi with the Sun and was now sitting combust to the Sun at 14 Capricorn 32 in Djokovic’s twelfth house, close to his Ascendant. Transiting Pluto, the co-ruler of his natal Scorpio VSP was in an exact conjunction with the transiting Sun in Capricorn in his first house, both making an uncomfortable semi-sextile to his natal Uranus in Sagittarius in the twelfth house of hidden enemies while transiting Mars, the other co-ruler of his natal Scorpio VSP was in close conjunction to his natal Uranus here in the realm of hidden enemies as well.

Novak Djokovic and Australia, have what is called a Karmic Star relationship with Djokovic’s Scorpio VSP “feeding” Australia’s Cancer VSP but also with Australia’s Cancer VSP reciprocating, as both are joined on the Venus Star in a biquintile aspect which usually enables harmony in living and working together. Certainly, the recent events between Djokovic and Australia seem far removed from this state of harmony, but it is important to remember the long and until now, close relationship the two parties have enjoyed with one another. Given there is a fundamental depth in the relationship, as evidenced by the Karmic Star relationship between them, in time the two may either reconcile their differences or, this may well be the point of no return where the completion phase of the relationship has been reached. It may take until the next time the VSP is in Capricorn on 6 January 2026 for the issues between Djokovic and Australia to be resolved. It will be an Evening Star on this occasion. Perhaps in her more peaceable Evening Star phase, Venus may help to restore good relations or facilitate a more conciliatory final parting of the ways. 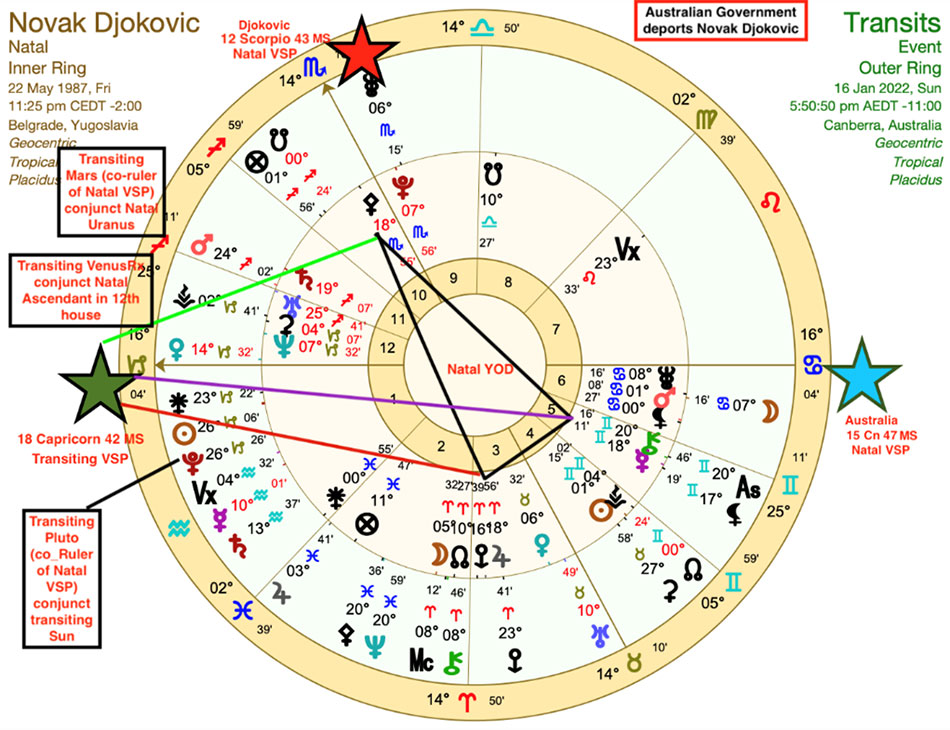