For the month of May, we find our wandering Venus  dividing her time equally between Aries and Taurus. Rams and Bulls, then, will be delighted to receive a visit from Venus who very often bestows gifts of pleasure and joy. The first half of the month while she’s in Aries, we note her more warrior and fiery temperament. She’s in a hurry, no time, keep moving, all is good, but all is busy! Then by mid-month when she drops into Taurus, you could say she needs a day or two of chill before she picks up the pace again to take care of current pressing affairs. 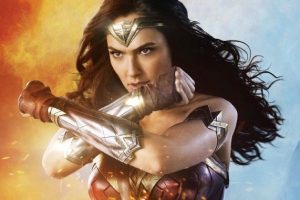 Aries, considered the first sign in the order of the zodiacal wheel, is a sign that initiates. In Aries, Venus would most likely initiate the first move, and act quickly at that. While this can lead to impulse buying or decision making, she nevertheless delights in jumping into the fire before she knows exactly what made her do it.

But take note. In Aries, don’t look for deep…look for engagement. With Libra as Aries polarity point, companionship and support is an important component to her. And, she needs to make sure that both parties are heading in the same direction.

In Mythic Astrology it is the goddess Athena who is the guardian spirit of Aries. For females with Sun or Venus in Aries, it is Athena who speaks and guides. Athena’s role as the strategic advisor to warriors serves her well. She knows instinctively how to maneuver through challenging and threatening situations by re-directing the energy or by shrewdly out-smarting her adversaries.

One reason Venus in Aries or Aries in general has the reputation of being so contentious could be the appearance of the newly discovered dwarf planet Eris. Eris, called by the ancients the goddess of “discord”, has been in Aries since 1925 and will continue to be there well into the 21st century. Therefore, all of us alive during this time who possess Aries planets (or Libra) have Eris to contend with—and she does shake the tree! Her position at present is 23 Aries, where she will remain for several more years. She is seen by many contemporary astrologers as a feminine warrior figure. And you could say, she is succeeding in that cause!

Venus in Aries can be the hero/heroine. I love the idea of Wonder Woman as Venus/Aries archetype, who reveals herself to be an alluring Amazonian goddess whose primary motivation in life is to kill the god of war. I’m reminded of Asaf Avidan’s line from “The Labyrinth Song” wherein he sings: “can it be that all us heroes have a path but not a plan?” It is not until WW meets the wounded pilot, that the path is formulated and the plan is set into motion. Forget for a moment that she has no clue as to how the world outside of her sacred and protected land operates. She has no idea of the dangers involved. The pilot wants to be her hero, tries to warn and protect her from jumping in too quickly, but she will not be stopped. She pushes through on sheer instinct and will. Together they triumph. Together, they are a formidable force. Consider this when you partner with a Venus or Venus Star Point in Aries—do not try to stop them. Either move aside and let them fly or lend your support to their cause. 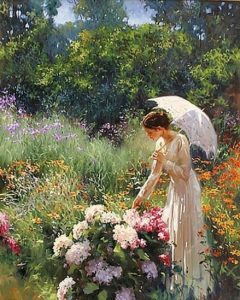 A Woman In Her Garden
By Richard Johnson

And now for something completely different!

You might feel a shift in your desires by mid-May when Venus moves into her home sign of Taurus. The painting above, depicts the image typically associated with Venus in Taurus – that she’s not only at home in her garden, but it can be the primary source of her fulfillment. This is due to the idea that Taurus is the earth sign and for most of us in the northern hemisphere, the beautiful palette of colors and scents fill the air during the Taurean month which is April 22 to May 20-21 this year.  Venus, currently trailing the Sun, arrives to the garden a bit later, but for about 5-6 days between May 15-20 we will feel the double embrace of the Sun and Venus shining their light onto the sign of sensual and earthly delights.

If Aries is the activist or warrior woman, going full force after the object of her desire, and needing to prove her worth to herself and to the world, Venus in Taurus takes a whole different stance. She demonstrates her skill by attracting what she wants, by standing still and occupying a place of power. She remains grounded and centered, exuding and fine-tuning the art of attraction. Some of the ways she achieves this is  through creating objects of beauty, in the world of fashion, beauty, the fine arts, music, sensuality and pleasure. She distils beauty from the earth, such as gemstones and jewels, essential oils and flower essences, herbal extractions, cultivating a fine garden of food, herbs or wine.

But what of the Taurean tendency towards stubbornness? This is something every Taurus has heard or said about oneself. Let’s just call it “Bull-headed”, to protect what is theirs. Think of Scarlett O’Hara as a true Taurean archetype, holding on to Tara, the sacred land, no matter what obstacles came her way.

Venus has always been the planet associated with Taurus and the connection needs no real explanation. In Mythic Astrology another association comes to mind – that is Gaia, or Earth, also needing no explanation. With both Venus and Gaia watching over Taurus, it can be twice-blessed.

In the yearly round of the zodiacal scheme, Taurus follows Aries and can bring us that beautiful garden that we worked so hard in Aries to plant. This is true of many of the signs—the yang sign Aries is initiatory and we envision or set into motion, while the yin sign of Taurus can deliver the goods or bring us closer to the fulfillment of that dream.

In the Venus in Taurus pantheon of people we find so many talented male artists and musicians, ones who produced classics that will resonate throughout time. To name a few, we have Richard Rogers, Burt Bacharach, Willie Nelson, Paul McCartney, Brian Wilson, George Lucas, Prince, Salvadore Dali and the grand master, none other than the genius who painted the most celebrated woman in the artistic world—Mona Lisa, still reins some 500 years later: Leonardo da Vinci.

In the Aries/Taurus mix, two notable women come to mind. Speaker of the House Nancy Pelosi is an Aries Sun with Venus in Taurus. Gal Gadot (the actress who portrays Wonder Woman) is a Taurus Sun with Venus in Aries! Here we can see the fine blending of Venus and Mars (yin/yang or anima/animus) integrated into one being where Venus and Athena come together to deliver strength and wisdom from the heart.

The entire month repeats themes of Taurus and Scorpio—the acquisition and attainment of personal resources and the letting go or disbursement of same. This involves people as well. Not that we “acquire” them, but we do form important relations with them. Examining our hold and expectations from others is something for us to consider this month. It’s as if the Venusian force wants to be possessed, but also knows it needs to loosen the reins.

During the first week of May Venus contacts asteroids Vesta & Pallas, along with the Nodes.  New projects involving personal securities, possessions and resources are being closely examined as the New Moon in Taurus on the 4th gives new impetus to sorting out old matters. Some organizing, serious spring cleaning around the home, garden, office, and even family may take up the majority of our time. Time spent allowing the forces in life that push us to let go, grieve, heal and re-group are also apparent, with the parallels to Chiron and Neptune.

From the 7th to the 14th, Venus contacts Saturn, Jupiter, Pluto and Mars—all the big guns—forcing her to deal with serious business involving long-term planning and goals. This is Venus’ last week in Aries until spring 2020, so she’s acting on her impulses quickly and with strong intention. On the 7th when Venus squares Saturn, we realize we have to make some major cuts to get there, like a serious clean-up and reorganization before we can take steps forward. . But by the 9th, we’ve turned a critical corner (at least in our minds) when Venus simultaneously connects with Pluto, who brings endings and Jupiter, who points the way over the rainbow to new beginnings. We might be contemplating pending graduations and be very oriented towards our next important steps on the journey.

From the 18th on, Venus connects with outer planets Uranus and Neptune, creating a field of possibilities and the exploration of new areas, both earthly and out-of-bounds unearthly, veering into outer dimensions. Big surprises are in store. Suddenly something comes into our field of vision that we couldn’t have possibly imagined before. But now we see all the signs were there as it comes into focus.

Taurus works for life-long security and often thinks it’s achieved it. But universal law tells us everything changes and in fact is in a constant state of change. This is especially true now with Uranus in Taurus for the next 7 years. The old rules no longer apply. Find new ways to relate, to partner, to connect and to accept the ever-changing reality in life’s drama. From that awareness comes the satisfaction in embracing the enormous power of the present, as if nothing else really matters. When there are no expectations, there is peace and freedom. Trust the cosmos to know what it’s doing.