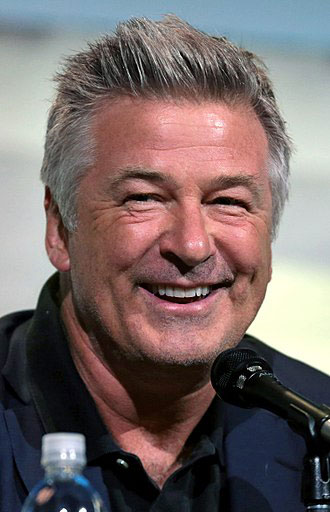 “I’m not actually writing this book to discuss my work, my opinions, or my life.
I’m not writing it to explain some of the painful situations I’ve either landed in or thrown myself into.
I’m writing it because I was paid to write it.”
From the preface to Alec Baldwin’s memoir Nevertheless

Alec Baldwin, American actor, writer, comedian, film producer, and political activist was born on 3 April 1958 in Amityville, New York, USA under a Scorpio Venus Star Point (VSP) Evening Star, ruled by Mars in Aquarius and Pluto in Virgo. (Note, time of birth is either recorded as “unknown” or as rectified by Starkman. This analysis uses the Starkman rectified chart). The oldest of six children, he grew up in financially poor circumstances where his schoolteacher father struggled to make ends meet and where the emotional impact this had on Baldwin’s mother spurred him on to make powerful financial independence and security a priority in his life.

On the Venus Star Point, the Scorpio VSP “feeds” the Cancer VSP and the emotional intensity of the Scorpio VSP is demonstrated by Baldwin’s strong willpower and drive to succeed in the acquisition of fame and fortune, the driving force, whether conscious or not, being the desire to protect, nurture and transform his family. Not only did he manage to work his own way out of his poverty-stricken beginnings, but he also paved the way and brought transformation for his three brothers facilitating their careers in acting, producing, directing, and writing. 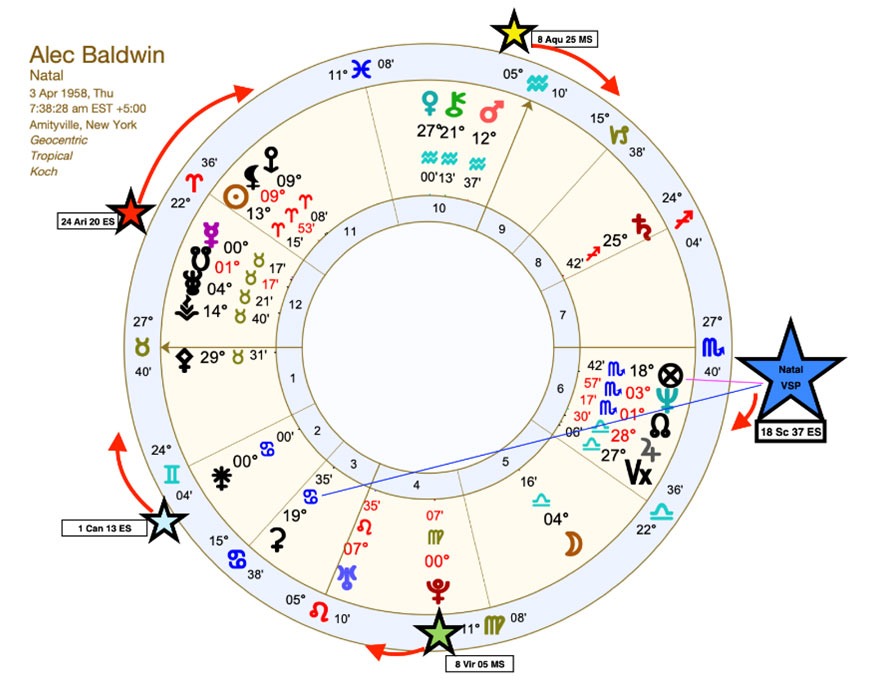 Baldwin’s Scorpio VSP strongly influences his health, work, and service in the world, being placed in the 6th house of his natal chart. It is in an exact conjunction to his Part of Fortune, increasing his capacity for attaining happiness and success and it is also trine Ceres in Cancer in the area of life involving communications and one’s siblings and neighbours, enhancing his instinctual desire to nurture his family. Every point of his “Starman” is in aspect to either a planet, point or asteroid in his natal chart, including: his Midheaven and Mars (Aquarius VSP Morning Star influencing his career and reputation); Eris and Black Moon Lilith (Virgo VSP Morning Star highlighting home and family), Juno, Mercury and the Nodes (Cancer VSP Evening Star emphasizing personal resources ) and Saturn (Aries VSP Evening Star accentuating seclusion, spirituality and hidden enemies).

The balance of elements and modalities on his Starman is dominated by cardinal and fixed water (Scorpio and Cancer) underscoring the emotional intensity of the Scorpio VSP and increasing sensitivity and intuition. His Starman is more weighted with Evening Stars and has a more Yin nature, which all helps to slightly ameliorate the main Scorpio VSP being fuelled by the firebrand powerhouses of Mars and Pluto which are traditionally associated with combative impulses and confrontation with extreme life and death circumstances. 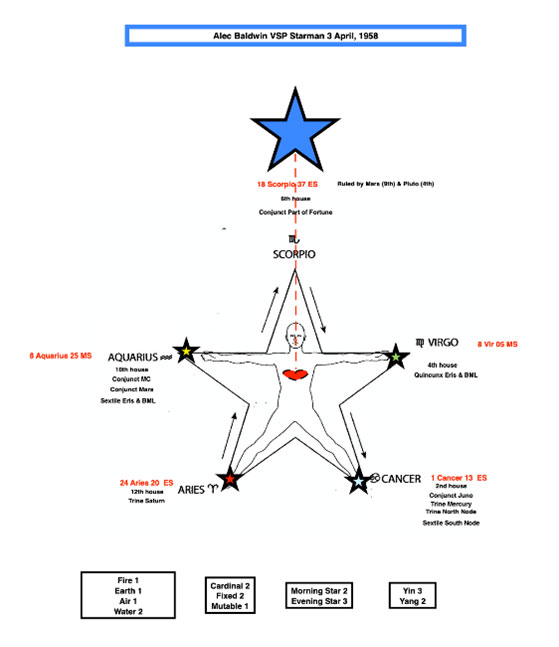 On October 21, 2021, Baldwin was rehearsing on the film set of Rust in Bonanza City, New Mexico when a prop firearm he was using delivered a fatal shot to the cinematographer Halyna Hutchins and wounded director Joel Souza. At the time, no charges were filed, and no arrests made. The tragic incident occurred when the main transiting VSP was an Aries Evening Star in the domain of collaborative networks in Baldwin’s natal chart, opposing his natal Moon in Libra in the area of creativity and trining his natal Uranus in the area of home and family. The other VSPs that were highlighted at this time were the Capricorn Evening Star VSP square his Progressed Black Moon Lilith, bringing to prominence the areas of beliefs and the law and collaborative networks, and his own natal Scorpio VSP Evening Star in the domain of health, work and service quincunx the same point of the Progressed Black Moon Lilith.

Shortly after the new Capricorn Morning Star VSP came into being in January 2022, Baldwin handed over his mobile phone for investigation after being issued a search warrant by the Santa Fe police and a slew of lawsuits have been filed against the production and several crew members for negligence (Baldwin being one of the producers as well as the leading actor). It may not be until October 2022, that the full ramifications of this tragedy, and Baldwin’s part in it, will be brought to light, when the next VSP Libra Evening Star takes over, making a close conjunction to Baldwin’s natal Jupiter and Vertex in highlighting issues of health, work and service and a sextile to his Progressed Pluto in the domain of home and family.