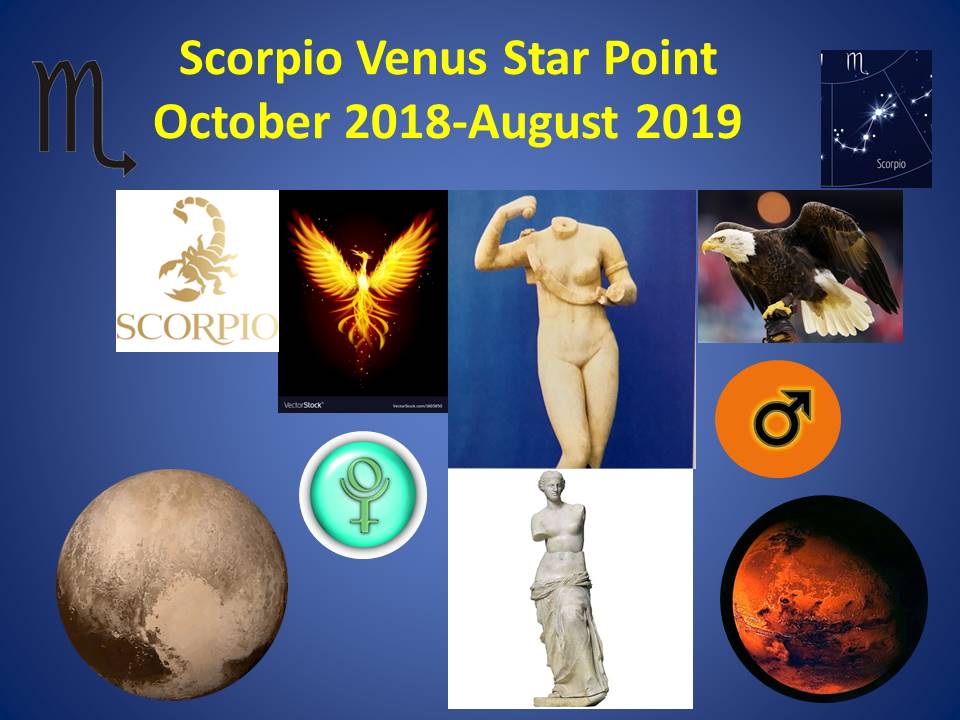 It’s a good time now to think back to March 2017, the last time Venus went retrograde and began a new cycle in the sign of Aries. As  we are about to witness the completion of that cycle, we are beginning a new one which will occur in Scorpio. There is often an overlap during this time — an ending phase and a beginning phase that occur simultaneously.  Think of this as the tidying up or even a releasing or renewing of what that period brought forth in the way of investments, commitments, engagements and the initiation of new activities in our lives.

We are getting ready for the next Venus Star Point at 3 Scorpio which will occur on October 25, the date the new cycle of Venus begins, while retrograde. The Star Point occurs when Venus, Earth and the Sun are all in alignment, something referred to as a “cazimi” or the Kiss of the Sun. But before that, we will see Venus go retrograde, on October 5th, at 11 Scorpio. Scorpio is the sign of things that might not be readily visible on the surface, calling forth Venus to look at what lies hidden beneath. What is beneath? Is it buried treasure or is it trash? As Venus slowly makes her way back over these first 11 degrees of Scorpio, we might discover a little bit of both. Scorpio is both private and secretive.

What happens when planets transit through this region of the zodiac? Things you thought were private can become public. Lies are exposed. The distant past may rear its head in frightening ways. Emotions bubble forth like the underground sleeping volcano or dragon that is suddenly ignited by a lightning bolt. Deception and betrayal can be evidenced. People whom you once trusted can now be seen to be not so trustworthy. The eagle-eye of Scorpio is upon us. As Scorpio is a Mars-ruled sign, it can give us courage to get down to the truth, even if it means bursting a bubble. And Scorpio is also a water sign. Call forth the feelings of the deep that do not lie. People with planets in Scorpio’s domain have a built-in b.s. detector. The mind may not wish to believe it, but the core feelings cannot deny it.

As I write this, the Brett Kavanaugh hearing is taking place, perfectly timed in this cycle of Venus in Scorpio. It is a gut-wrenching event, and no matter who you believe, the process will leave a fair amount of corpses in its wake. Sure, this is political. But in our current era, things are political. Last year in early October the #metoo movement began, when the Sun and Jupiter were transiting over early Scorpio, on the degree of this year’s Venus Star Point. So as Venus and the Sun reactivate that part of the zodiac in this time period, the battle is re-engaged. What is the truth? It is a contentious battle, with many people in power vehemently denying the allegations raised against Kavanaugh, a would-be Supreme Court nominee. Christine Blasey Ford was the first to come forward to raise a red flag against him for the sexual mis-conduct and abuse she received at his hand, and now is being joined by a chorus of others with similar claims.  Early Scorpio IS the region of sexual mis-conduct. It has been shown, again and again, that when planets are positioned over this region, people in high places are exposed. In the past, the people in power were supported. But the times are (slowly) changing and the tide is turning in another direction. Finally, the victims are being heard.

Embedded within the current Venus cycle, is an exact square between Venus (female) and Mars (male) principles, advancing the contentious battle being waged between the accuser, Dr. Ford and the accused, Judge Kavanaugh. While not every sexual allegation is necessarily male vs. female, the symbolism of Mars squaring off with Venus does not bode well for the male/female dynamic at this time. Venus in Scorpio is emotional, passionate, and feels things deeply. It asks to be heard. Mars in Aquarius can act like it is hearing the painful cry of Venus, but reacts with detachment and can coolly dis the whole affair. These two are like fire and ice. The hotter Venus becomes, the cooler becomes Mars.

Hopefully none of us will experience the level of drama that these hearings are engendering. But one thing is clear. It will bring up deeply felt emotions that may have been buried for a long time. This is why it is important to bring forth the buried treasure. Yes, deeply held emotions can indeed turn out to be treasure. You might refer back to this same season in 8 year increments, when Venus last transited in retrograde through Scorpio, such as 2010, 2002, 1994, 1986, etc.

But Scorpio is not just the sexual mis-conduct and cover-ups. Certainly, sex and sexuality are important elements of this time, as is gender. Scorpio is a Mars sign, while Libra is a Venus sign. Venus and Mars represent the female and male principles in life, polarities that are possessed of highly-charged reactions to one another. If it wasn’t for this dynamic connection, we might be faced with a diminishing population, possibly verging on extinction. Instead, it is the vibrant meeting of these two energies that brings incredible desire and ultimate mating, resulting in the dominant Homo Sapiens population of today’s world. It is what brings male and female together!

This is the era of the gender-bending phenomena. This year Mars, the male planet, reversed direction and is now being followed by Venus, the female planet. And the third party to this dynamic duo is Uranus. Uranus, known for radical change, affects both sexes so we may see more people embracing changes and coming out to themselves and the world. Whether we are dealing with a battle of the sexes, new definitions of gender, people’s phobias about trans-genders or same sex preferences, this is now how the current is flowing and cannot be reversed.

We are in the last decade of a 100-year passage of the Venus Star through the sign Scorpio. Important events of history occur when the Venus Star Point leaves a sign and enters a new one.  We can anticipate a shift in the masculine/feminine dynamic during this migration, similar to what we have witnessed during the dramatic gender restructuring that has occurred during these past 90 years of the Scorpio Star Point transit. In other words, women aren’t always from Venus and men are not always from Mars. Often, the reverse is true, especially as evidenced during these last 80-90 Aries/Scorpio Star Point periods. It is certain that male and female roles have transformed even for the hetero-sexual population. And now, as we approach the end of Venus’ passage through Scorpio and Aries, the mutation and morphing of genders is no longer limited to one’s emotional and psychological well-being, but is extending to physical realms as well.

The retrograde of the 2018 Venus cycle, shown here, represents the “hot” area of the horoscope in this cycle, between 25 degrees of Libra to 11 degrees of Scorpio, with particular emphasis given to 3 degrees Scorpio, the new Venus Star Point degree. Note that two signs are being impacted in this cross-over Venus cycle—both Libra and Scorpio.

There is so much more to say. So please tune into one of the fine presentations that are upcoming on the web. Just follow the links below to access simply some of the best Venus cycle material available on the planet right now!