The Venus Retrograde Cycle of 2010

The Venus Retrograde Cycle of 2010

From October 8 to November 18, 2010 the planet Venus will be in a 40-day retrograde cycle, a phenomenon this planet repeats every 584 days. Similar to a new moon, we might call this a new Venus, in that at the halfway point of the 40-day retrograde on October 28, Venus kisses the Sun, beginning the new Venus cycle in Scorpio. This cycle will repeat again in 1.6 years, on June 5, 2012 when Venus will begin again in Gemini, in the much talked and written about Venus transit of 2012. Of major significance is that over an eight year period, Venus performs this kiss of the Sun five times in retrograde motion (inferior conjunction) and five times in direct motion (superior conjunction), producing two almost perfect five pointed stars. Against the backdrop of the 12-sign zodiac, we observe the nature and character of the star of Venus in any given historical time frame (see Figure 1). For instance, in the current Venus Star period, the activation point is in Scorpio and its other four star point partners in the eight year cycle are: Aries, Capricorn, Leo and Gemini. These activations are called Venus Star Points ™, all of which have strong implications for the manner in which they affect individuals, relationships and historical events. 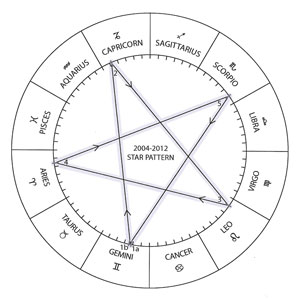 Notice from the above list, that the Venus Star takes eight years to complete – the 2004 star activated Gemini in retrograde motion as a Morning Star and will come back to that sign in 2012 in the same manner. But halfway through the eight year period is a four year activation to Gemini as an Evening Star, in 2008. The Morning Star phase initiates the New cycle of Venus; the Evening Star phase is considered the Full cycle of Venus, treated similarly to New and Full Moons, except that it is Venus, not the Moon, interacting with the Sun and Earth.

Venus is the planet that brings love (and war). The Sun is the giver of life and light. The combined energy of each particular Venus Star Point acts like a laser beam of light and love. Thus, Venus sends its beams to planet earth, activating the principle of love reflecting the astrological energies of that cycle. Part of the Venus Star phenomenon is that the Star is produced from the combined energies of Venus and Earth acting in tandem, as viewed from Earth.

You might remember the twilight hours of summer, when just after sunset there appeared in the western sky a big object shining brightly, until 10:30 pm local time at its height of elongation. No wonder the ancients assigned this star to lovers. We have now bid farewell to Venus in the evening sky, preparing to greet her as the Morning Star once she moves away from the beams of the Sun, on or around November 5th. Depending upon altitude, geographic location and local weather conditions around November 5th, begin looking for her bright light to salute us before the rooster crows, energizing our days with a fighting spirit and the courage to tackle even the most challenging of life’s circumstances.

Venus initiates the present new cycle in the sign of Scorpio, related to wealth, power, sexuality, death, rebirth and transformation. This new Venus Scorpio Star cycle will last until August 2011 when the next new cycle of Venus will occur in Leo at which time I believe we can safely predict the economic recession to be over. The Venus Star Point gracing the sign of Scorpio favors a time when people will be inclined to marry or join forces with another, invest jointly, fund some particular kind of research or institution and explore the less-known, more mysterious realms of life. Because Scorpio is a sign pertaining to elimination, release and renewal – during this cycle we might think about what we need to let go of that is impeding progress and evolution. This is particularly true of how the Venus Star energies are affecting global activities in the present time frame, and applies to our individual lives as well. Scorpio’s ruling planet is Pluto. The current Venus Star in Scorpio is sextile Pluto in Capricorn , offering individuals a rare opportunity to achieve the desired new cycle of renewal and rebirth in way that is being naturally supported by the cosmos. When the Venus Star transits a sensitive point in a person’s astrological chart (see degrees in Figure 1 above), an important cycle of Venus is being initiated or culminated. 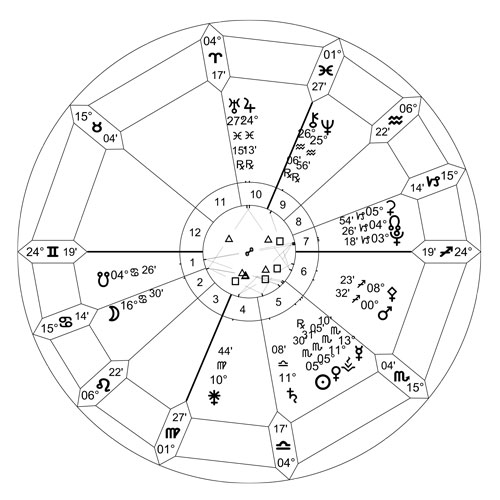 This material is based upon the book Venus Star Rising: A New Cosmology for the 21st Century. For the book, research was conducted upon a celebrity database of 1,500 people and a private database of 500 people. The conclusions that were drawn is that the Venus Star Point is an important addition to every chart for astrologers. Astrologers might note that this point is not the natal Venus of the chart – it is the Venus Star Point, an entirely new concept. For non astrologers, the book contains a list of Venus Star Dates, enabling the reader to discover which sign the Venus Star was occupying at their birth. This will reveal what motivates them in life, where their true talent lies, how they best harmonize with other Venus Star Points in relationship and how to be in synch with the planet Venus on a daily basis, inviting beauty, harmony, love and peace into their world.