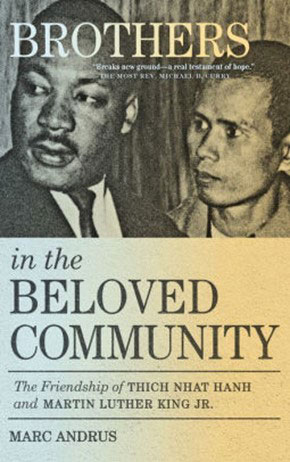 Natal VSP, friendship with Thich Nhat Hanh and
how their VSPs interacted in each other’s charts,
VSP at time of famous speech and assassination

“I refuse to accept the view that mankind is so tragically bound to the starless midnight of racism and war,
that the bright daybreak of peace and brotherhood can never become a reality…..
I believe that unarmed truth and unconditional love will have the final word.”
Martin Luther King Jr.

Dr. Martin Luther King Jr., American clergyman and inspirational leader of the American civil rights movement was born on 15 January 1929 in Atlanta, Georgia, USA under a Cancer Venus Star Point (VSP) Evening Star, ruled by the Moon in Pisces. This placement engenders an exceptional gift of sensitivity, intuition, and a feeling of Oneness with humanity and was demonstrated by Dr. King’s great gifts in leadership by being able to reach into the hearts and homes of his fellow Americans (Cancer) through his magnificent, poetic and deeply moving oratory skills, delivering his profound message of love, peace, goodwill, and non-violence. These gifts and talents were publicly recognised worldwide when he received the Nobel Peace Prize laureate of 1964. 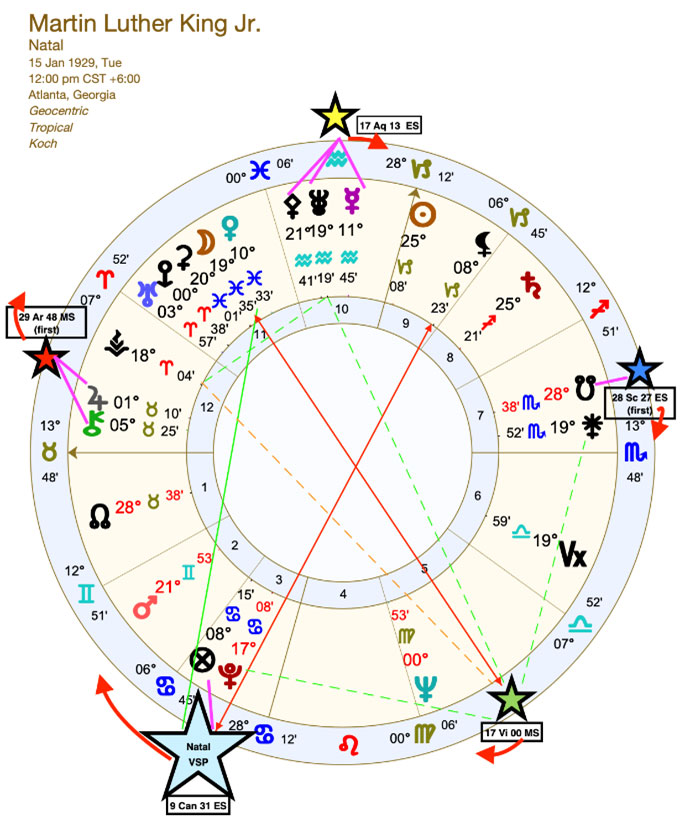 Seemingly foredestined in his youth to follow in the footsteps of his grandfather and father who were Baptist Ministers (to follow the family business or vocation is a common theme for Cancer VSPs), during his adolescence King began to question whether this path was right for him and considered other career options in medicine and law. On the Venus Star Point, the Cancer VSP is “fed” by the Scorpio VSP and in Kings’ case, this placement, on his receiving leg/foot is closely conjunct the South Node in the domain of partnerships and opposite the North Node in the domain of self and independently taken action, in the fixed sign of Scorpio so there seems to have been some strong karmic intention, and expectation that his life be devoted to the Ministry and in 1947 he was ordained into his father’s church.

However, in 1955 at the age of 26, he turned down the opportunity to be the successor to his father’s ministry and set up his own in Montgomery, Alabama, inspired by the non-violent activism of Mahatma Gandhi and determined to follow the road less travelled along this path.

Dr. King’s Cancer VSP, in his 3rd house of communications (a natural domain for an orator) is in close conjunction to his Part of Fortune indicating the ability he had to unite people for a common cause with the hope and joy he was able to convey to people at a very deep, emotional, transformative level, with Pluto being in a wide conjunction to these points. His Cancer VSP is also in a close trine to an exalted Venus in Pisces in his 11th house of groups, associations and collaborative networks suggesting the spiritual and poetic foundation for his messages of hope, love, and peace.

Furthermore, his Cancer VSP is in an exact opposition to Black Moon Lilith in Capricorn in his 9th house of beliefs, foreign journeys, explorations, and the law revealing an ability to work within structured, hierarchical systems but also the ability to deeply understand, disrupt and penetrate the dark and oppressive sides of these systems. He developed a policy of passive resistance which evolved into his work as a civil rights activist and was often arrested, vilified, spied on, discredited, and shamed by those in power and physically attacked and stoned by his opponents, including the bombing of his home. 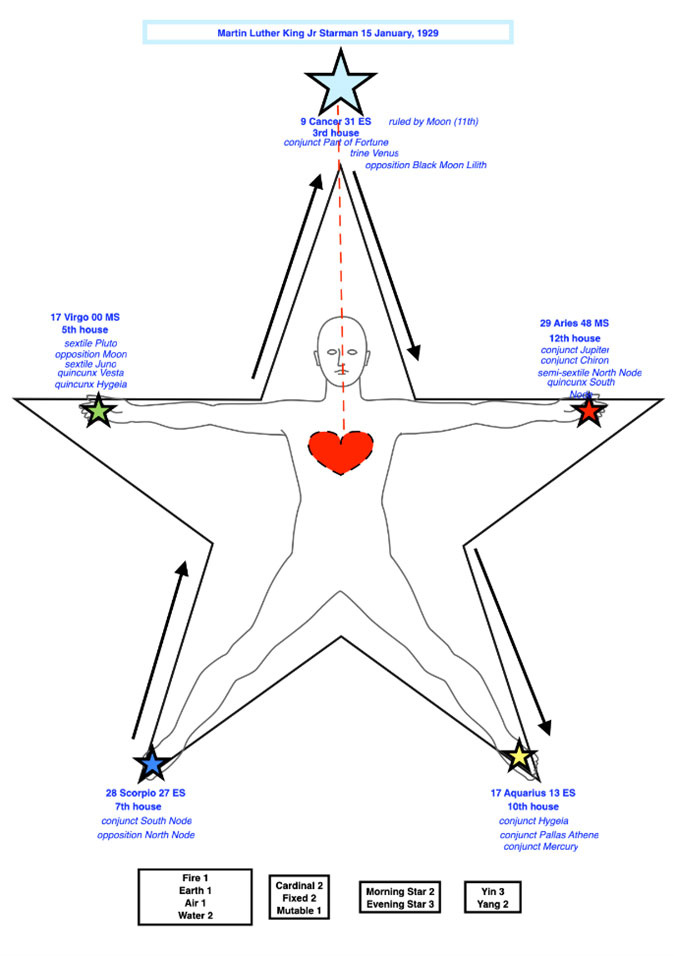 Every point of his “Starman” is in aspect to either a planet, point or asteroid in his natal chart, including: Jupiter and Chiron (Aries VSP Morning Star in the realm of seclusion, spirituality and hidden enemies); Mercury, Hygeia and Pallas Athene (Aquarius VSP Evening Star influencing his career and reputation); Pluto, Moon, Juno, Vesta and Hygeia (Virgo VSP Morning Star with this point also being the apex of a Yod with Vesta and Hygeia at the base) and Scorpio VSP Evening Star on the Nodal axis as discussed above. The balance of elements and modalities on his Starman is dominated by cardinal water (Cancer) increasing his already significant intuitive gifts and exceptional talent for leadership. His Starman is more weighted with Evening Stars and has a more Yin nature, which can be seen in his heart-filled commitment to following the path of peace and non-violence.

The powerful effect these two great men had on one another can be explained through the connections their respective Venus Star Points made to one another, for the meeting and subsequent friendship was deeply transformative for both. Hanh’s Aquarius VSP Morning Star, shining upon King’s 10th house of career and reputation, conjunct Mercury, Pallas Athene, and Hygeia is “fed” by King’s Cancer VSP Evening Star and the phases of their respective VSPs complement one another. King’s Cancer VSP shines within Hanh’s 7th house of partnerships, conjunct Hanh’s Nodal axis and a wide conjunction to his Pluto, signaling a deep and abiding karmic connection between the two. There is a lovely story that illustrates the “feeding” principle of the VSP between Cancer and Aquarius, at their second meeting which occurred in May 1967, in Geneva Switzerland, around the time Dr. King was calling for Thich Nhat Hanh to be awarded the Nobel Peace Prize. They were staying at the same hotel on different floors and King invited Hanh (whom he referred to as his “brother”) to share breakfast with him. Hanh was delayed after being detained by the press and arrived late and was deeply touched by King’s gesture of keeping his breakfast warm and waiting until Hanh arrived to start his own breakfast. In gratitude, Hanh revealed that in Vietnam King was considered to be a bodhisattva for his authentic, living example of compassion and understanding towards all living beings.

On 3 April 1968 King delivered his famous speech, “I’ve Been to the Mountaintop” at a rally in Memphis, Tennessee, in support of the Poor People’s Campaign. On the way to the rally his flight had been delayed as a result of a bomb threat against him. On this day the current transiting Virgo VSP Morning Star in his 5th house of creativity, joy and pleasure was in an exact trine to his Chiron in Taurus in his 12th house of seclusion, spirituality, and hidden enemies. All the other transiting points on the current Star made significant connections: Gemini VSP Evening Star in his 2nd house of personal resources semi-sextile his North Node, quincunx his South Node and semi-sextile transiting Black Moon Lilith in Taurus; Aries VSP Morning Star conjunct his Vesta in Aries in his 12th house, and conjunct transiting North Node in Aries; Aquarius VSP Morning Star in his 10th house of reputation and career, square his Chiron; Scorpio VSP Evening Star in the 7th house of partnerships, trine his Pluto.