Summer in Santa Fe is a time when people love to gather outdoors in the cool evening air – and there is no shortage of opportunities to enjoy outdoor music festivals, dancing on the Plaza, the Opera, etc. But tonight, as I sit and look out at the almost full moon in the evening sky, one of the first things I contemplate is that I actually can sit outside this evening. And for this I am grateful.

That’s because tonight there is no wind. For nearly two months, the wind has been blowing like crazy and the state has been in severe drought. Which makes sitting outside as much fun as being downwind of a bunch of kids in a giant sandbox, hurling the sand in every direction as fast as they can. And, for the past three weeks, the wind has also been delivering —straight to our front doors—the hideous smoke and ash from the fires burning in Arizona, near the New Mexico border.

In fact, when I reflect on Arizona, it makes me wonder what’s going on in  that great old state with the Grand Canyon and all those other fun places to visit (Sedona, Tucson, etc.). Because it seems like Arizona has had nothing but trouble for the past couple of years. So I turn to the locational maps and voila! There it is, right before my eyes.

Two years ago, in the summer of 2009, the planet Neptune crossed into Arizona. This was about the same time the new governor, Jan Brewer, came in. Neptune has been transiting the last few degrees of Aquarius for what seems like forever now, and Arizona sits smack into those last few Aquarian degrees on the geodetic map of the world. Now, Neptune is a planet of the sea—remember Poseidon and Pisces and all its watery associations? What’s it doing in the desert? Never mind that it’s hundreds of miles away from a sizeable body of water on the ground, there’s not even any water falling from the sky these days. How can the god of the sea possibly survive in the desert? Evidently, not very happily.

When Neptune entered Arizona two years ago, Jupiter was right beside it, with both of them moving through Aquarius. Seemed like it could be a propitious event, no? With the old and new ruler of Pisces aligned together. After all, isn’t Pisces a sign of compassion and humility and sensitivity?  But Jupiter, the faster moving body, didn’t stay long, leaving Neptune to fend for itself all this time. Neptune is associated with dissolution, such as the great power and force of water pounding against the rocky shore and slowly eroding its mighty cliffs. Could we then assume that Neptune is slowly eating away and eroding some facet of Arizona’s infrastructure?

The first thing to emerge was Governor Jan Brewer, who proclaimed open warfare on immigration. “Let’s build a great wall,” the governor said. Let’s show those illegals that they are not welcome here (even though they do all the jobs that the legal residents don’t care to do). From that came the Arizona boycott with several large conferences being cancelled, potentially driving Arizona’s economy right into the gutter.

Once that fire cooled down, the next thing you knew was that a deranged gunman shot nineteen people at an open political forum in Tucson. Six were killed, including Christina Taylor Green, age 9. Congresswoman Gabrielle Giffords was the target, taking a severe gunshot wound in the head, but who is today recovering from what could have been a lifelong brain debilitation. Truly, a sad day for the nation, a very sad day for Arizona. That was January 2011, with Neptune still holding court in Arizona, but now joined by Chiron as well. Chiron is the gifted, wise healer/teacher whose lesson to humanity is that sometimes pain and suffering is the greatest teacher of all. It is what makes us human.

Now, we have fires raging out of control in Arizona and at last count, 469,000 acres have burned, fueled by heavy winds. Nearly 10,000 people have been evacuated from their homes and the smoke is blowing to neighboring states where we’ve been warned repeatedly not to go outside for very long if we are suffering from any kind of respiratory disease. Oh, and leave your swamp coolers on “OFF”. No problem, it’s only 105 in the southern part of the state and high 80s in the northern part of the state.

Neptune and Chiron will be dancing together, back and forth across the state of Arizona for another two years, until 2013. But wait, there’s more.

A very slow moving invisible planet named Transpluto has also been stuck in Arizona with no ability to leave for quite some time. Transpluto, as its name implies, lies beyond the orbit of Pluto (which is already far enough away) but seems to pack an even more powerful punch than Pluto does. Astrologers know Pluto to be a planet of power. Transpluto has been called a perfectionist, and has also been considered a planet of unstoppable power and force of transmutation. And, reflecting on the events going on in Arizona for the past few years, I’d have to conclude that there is certainly a very powerful force of transformation and transmutation going through Arizona now. Transpluto remains in Arizona until 2023.

As the planets travel from west to east on the geodetic map, all I can say to New Mexico is that the same grouping of planets is headed our way. Fortunately, by the time Transpluto gets to New Mexico (twelve years from now) Neptune and Chiron will be but a distant memory even if the wind is blowing them our way long before their due date. But tonight the moon outshines the smoke. 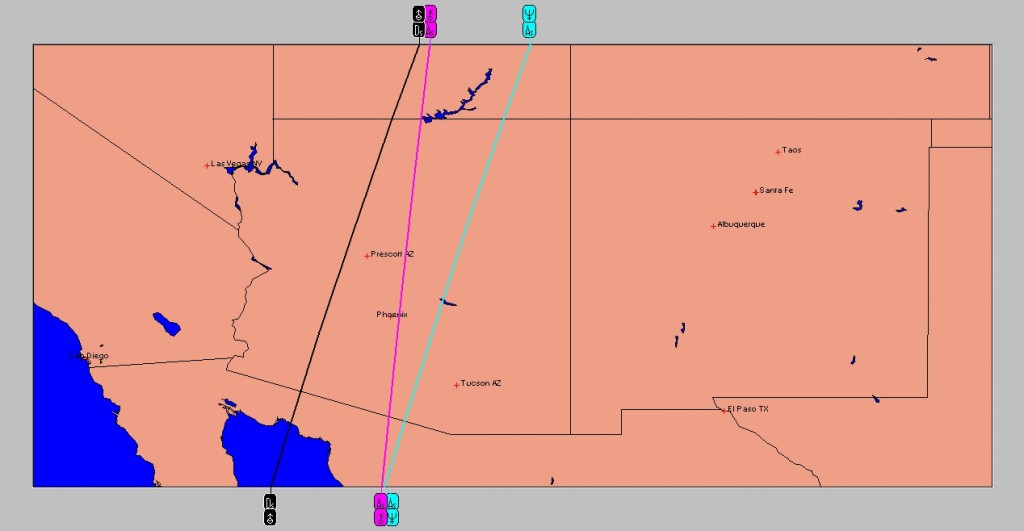 AS ABOVE, SO BELOW

These words are pearls of wisdom that are attributed to Hermes Trismegistus, thought to be a blending of the Greek god Hermes and Egyptian Thoth, god of wisdom and magic. As a mediator between Heaven and Earth, Hermes Trismegistus (thrice-blessed) can be traced back to the era of 1500-2000 BCE.

On the day that Uranus changed from the watery, oceanic sign of Pisces to the fiery, high-energy sign of Aries was a day most people in the world will remember in infamy. This was the day that an 8.9 magnitude earthquake shook Japan to its core and reverberated across the great expanse of the Pacific Ocean around the world. Was this Uranus’ punctuation point of leaving the water domain, into which it has been locked, for the past seven years? It’s the rebel finally escaping from prison – breaking through the walls with an attention-garnering explosion signaling its new-found freedom. And, now that it has your attention, Uranus will continue its revolutionary demands for the next seven years in Aries, that certain worldly functions go through radical and immediate changes. “Let’s start”, sayeth Uranus, “with nuclear power plants.”

JAPAN, PLUTO AND THE VENUS STAR

On October 28-29, 2010, the last Venus Star Point ™ was activated in the sign Scorpio. The world is under the influence of this star until August 15, 2011 when the Star Point of Venus will be activated through Leo. (see previous blogs on dev.sophiavenus.com for more about this).

Scorpio, the current star, is a sign of immense power and control, a subterranean energy ruled by the underworld god Hades, correlated to our planet Pluto. Since the Venus Star activation in Scorpio, the world has witnessed an explosion of Scorpio-related events, the most recent being the earthquake and tsunami originating in Japan.

So, what does Venus, a seemingly loving and benevolent celestial energy, have to do with the recent earthquake in Japan? Apparently, quite a bit. At the moment of the Venus Star Point last October, the planets were mapped around the globe in an “as above, so below” system of planetary mapping called Astro*Carto*Graphy©. In this system, whatever planet appears over a specific place becomes the location ruler for the time period in question. Over Japan at this time was Pluto, rising off the eastern shore. Saturn was also present, culminating through central Japan. Tie that Star Point activation into the alignment that was present on March 11, 2011, the time of the earthquake and subsequent tsunami and we find the gathering of four planets, including Venus herself. Ceres, Neptune and Chiron fill out the picture.

Ceres is the former asteroid, now minor planet that derives from Demeter, Greek goddess of agriculture, associated with Mother Earth. Neptune derives from Poseidon, god of the sea, whom the ancient Greeks referred to as “Earth Shaker”, as the majority of earthquakes happen below the surface of the earth’s oceans. Chiron is the centaur healing god of Greece, whose position in global affairs often points to a collective healing crisis which must be tended to. Neptune and Ceres are in late Aquarius about to cross into Pisces where Chiron is now positioned. All three of these bodies were tightly locked over the angles of Japan, in both maps (zodiac and geodetic). The crossover of Neptune into Pisces occurs in April 2011 where the god of the sea in the sign of the ocean gives it a new and unbridled power and strength to the waters of the world. The ancient Greeks did not call this deity “Earth Shaker” for no reason. The rumblings of Neptune in Pisces will surely arouse the oceans of the world with great command, and will be something to keep an eye on for the next 14 years.