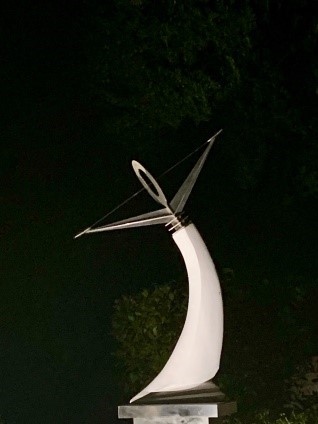 What sayeth Venus for November?

She begins the month in Sagittarius and goes through the entire sign in 26 days, when she then rounds the corner into Capricorn. And I do mean round the corner, as the cusp between Sagittarius and Capricorn is an important ¼ turn around the wheel of the ecliptic, marking the Solstice points on the globe. This is where planets speak to the world a place where their message becomes imprinted on the collective.

Just before she reaches that critical point she ends her swift journey through Sagittarius partnering up with Jupiter, the guardian planet of the Archer. The  Venus-Jupiter conjoining, the second one of this year(!) takes place on the 24th, when spirits should be high, people will be high and travel will increase, coming just before the Thanksgiving period in the US and the preparations for holiday travel later on.

Venus and Jupiter can be a glorious conjoining – if Jupiter in Sag says “bring it on, the more the merrier” and Venus says “let’s enjoy it” – this can lead to all kinds of excessive behavior and indulgences. For this month, that’s the flow of the stream—so enjoy it. By the time Venus heads into Capricorn she can deal with reeling in the budget, the diet and getting back to a more disciplined routine.

Sagittarius represents the higher mind, foreign countries, and long distance journeys. It is depicted by the centaur aiming his arrow straight for the Galactic Center, which by the way, is where the Jupiter/Venus conjunction occurs. There’s a message there, about aiming the arrow to a place beyond what the mind can even fathom, focusing on your mark and letting the cosmos handle the rest. (see our example chart below)

What does Venus love and enjoy in Sagittarius? Most likely dreaming about when she’s going overseas or embarking on her next adventure of learning and understanding. We can be planning our next trip or welcoming people from afar to our holiday tables in this Sagittarius season that represents, first, giving thanks, second celebrating the return of the light, and third coming into the new year. With the celebrations also come charitable acts, focused on the people, animal or plant life on the earth who may not be doing so well and who could use a hand.

The image of shooting beyond the farthest reaching shore on earth and actually aiming for the stars with that bow and arrow is no better exemplified than by our feature celebrity of the month with Venus in Sagittarius–David Bowie. Bowie (an adopted name but one that includes the word “bow” as in “bow & arrow”) not only shot to the stars, but more likely came from the stars. With projects like “Space Oddity”, Ziggy Stardust and the Spiders from Mars, Starman and the cult-classic The Man Who Fell to Earth, it is more likely that he was portraying his true self, not merely a persona. 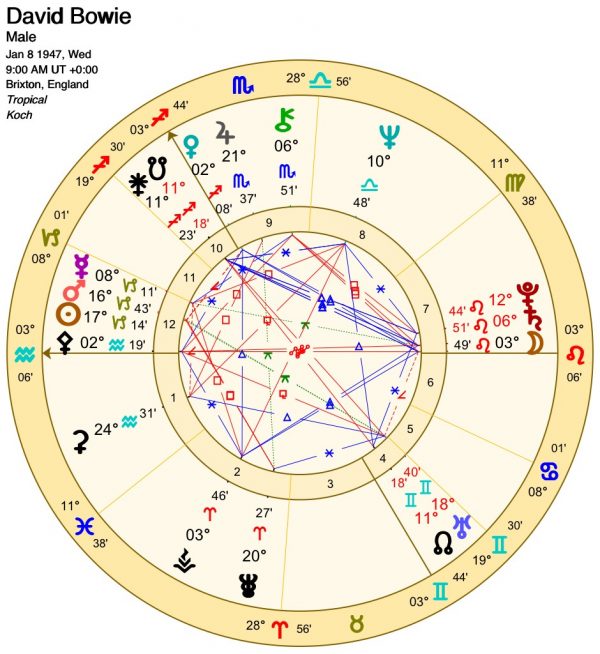 Here, in David Bowie’s natal map, we find a pairing of Venus and Jupiter, with the VSP sandwiched in between the two at 25 Scorpio. Thus, the VSP picks up the energies of both Venus and Jupiter and combines them into a dramatic statement of a charismatic, abundantly talented individual with a magnet that attracts wealth and fame. VSP in Scorpio is comfortable wearing a mask as he adopted the role of Ziggy Stardust. Strengthening the case of the ET, Aquarius rising didn’t hurt. 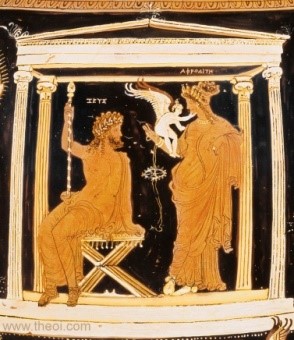 Vase Painting of Zeus and Aphrodite

However the Sabian Symbol for the conjunction this month between Venus and Jupiter, on the 24th occurs at the 29th degree of Sag, and is a bit antithetical. It is: A fat boy mowing a suburban lawn.   It actually combines the energies of Jupiter and Saturn. At the end of Sagittarius, here we find a fat boy on an upscale property, one who has seemingly over-indulged. Even his lawn is suffering from a case of Jupiterian over-growth. Now, heading into Capricorn (Saturn’s sign) it’s time to trim. Venus-Saturn people take note: the benefit of this pairing offers up an opportunity, or several during one’s lifetime, of weeding the garden, giving it a chance to breathe and an opportunity for new growth.

November 1—Venus enters Sagittarius—swimming up from below the surface and reaching to the stars
November 3—Venus trine Chiron—compassion for ourselves and others; be kind today—it goes a long way
November 5—Venus quincunx Uranus—plans change—go with the flow
November 9—Venus quincunx N Node—surprise meeting with fate
November 14—Venus square Neptune—sounds too good to be true; is it?
November 16—Venus quincunx Vesta—focus on what’s of value and meaningful
November 24—Venus conjunct Jupiter—the Big One—celebrate, entertain and enjoy
November 26—Venus enters Capricorn—the sign of the solstice, costume change
November 27—Venus square Chiron—protect yours (and others) feelings
November 28—Venus trine Uranus—a group gathering of festivity and enlightened ma
November 29—Venus square Black Moon—feelings surface that were submerged
November 30—Venus conjunct Ceres—a cornucopia of thanks to the harvest goddess

My heart goes out to California who is suffering from the disastrous effects of the fires and power outages. Be safe, be well.

Mythic Astrology is now available in reprinted editions. Check them out!

The second printing of VENUS STAR RISING: A New Cosmology for the 21st Century  is now available on Amazon!

April-May—Healing Sanctuaries of Greece-Ancient & Modern – April 26 to May 10, 2020. We have added some exciting features to this tour, including a visit to the island of Kos, the site of Hippocrates, Father of Modern Medicine. Early Bird discount until November 24, 2019! Check out the flyer here.